I'm not so good on the Noisy Nora girl-girl-boy family structure, but here are a few classic three-child families (with thanks to the brainstorming abilities of my co-workers):


She had found her two older children playing at being herself and father on the occasion of Wendy's birth, and John was saying:
"I am happy to inform you, Mrs. Darling, that you are now a mother," in just such a tone as Mr. Darling himself may have used on the real occasion.
Wendy had danced with joy, just as the real Mrs. Darling must have done.
Then John was born, with the extra pomp that he conceived due to the birth of a male, and Michael came from his bath to ask to be born also, but John said brutally that they did not want any more.
Michael had nearly cried. "Nobody wants me," he said, and of course the lady in the evening-dress could not stand that.
"I do," she said, "I so want a third child."
"Boy or girl?" asked Michael, not too hopefully.
"Boy."

Staying with the classics,  Babar and Celeste have an instant three-child family when their first-born turns out to be triplets in
Babar and His Children. The girl is named Flora; the boys are Pom and Alexander.

Another Alexander, this one of the Terrible, Horrible, No Good, Very Bad Day, is afflicted with two big brothers. 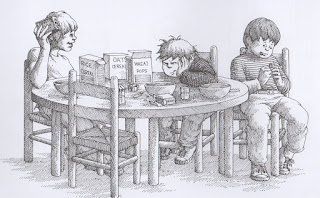 Three boys there, and on the other side of the country, three girls at the Quimbys'.  The summer after Ramona's third grade year, the ultimate little sister becomes a big sister.

Ramona Quimby was nine years old.  She had brown hair, brown eyes, and no cavities.  She had a mother, a father, a big sister named Beatrice who was called Beezus by the family, and -- this was the exciting part -- a baby sister named Roberta after her father, Robert Quimby.
"Look at her tiny fingernails," Ramona marveled as she looked at the sleeping Roberta, "and her little eyebrows.  She is already a whole person, only little."

Of course the baby becomes a bit more problematic as she grows, learns to spit mashed peas, screams a fair amount, and sucks up adult attention.

And another big favorite: Dogger, with a wonderful girl-boy-boy family.  It's a story of siblings caring about each other.  So I'll leave you with this lovely illustration, and I'll think of your future in Brooklyn whenever I look at it: 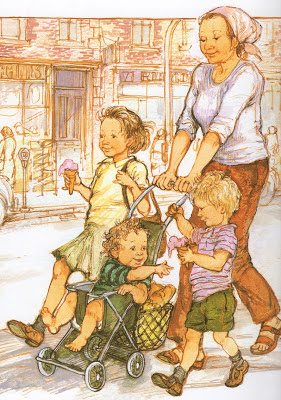