What a joy to see you and Lizzie today, on what would have been Grandpa's 100th birthday!  I loved the combination of family read-alouds: starting the afternoon watching Lizzie read to my girls, and then reading aloud so many of Grandpa's old letters and postcards.  A good day.

I mentioned to you that, of the books you sent Isabel for her birthday, another clear favorite has emerged: Maya Makes a Mess, a Toon Book by Rutu Mordan.  We have a couple of other Toon Books (both, I think, gifts from you) and I've always liked the idea of the series: easy-to-read comics aimed at kids, written and drawn by current cartoonists and graphic novelists.  The series is edited by Francoise Mouly, Covers Editor of the New Yorker.  On some of the early books, her husband Art Speigelman was listed as an advisor, and in looking at the website tonight, I noticed that their daughter Nadja (who I had the pleasure of teaching for a semester in high school) has written some of the titles in the series.  More to check out!

The girls like our other Toon Books: Little Mouse Gets Ready, by Jeff Smith (of the Bone series), and Silly Lilly in What Will I Be Today?, by Agnes Rosensteihl.  And I like them fine, too: active, cartoony drawings, a good introduction to the idea of a story in panels.  They're both a little one-note, however.  Little Mouse spends the panels of his book getting ready to go to the barn, putting on one item of clothing at a time, and talking himself through it.  The punchline at the end comes from his mother: "Why, Little Mouse!  WHAT are you doing?...Mice don't wear clothes!"  Silly Lilly's structure follows the days of the week.  On each day, she chooses a role to dress up in and act out: cook, city planner, musician, etc. They're cute, just a little flat.

Maya Makes a Mess is on a whole different level.  Maya begins her story at home, eating dinner with her parents, who criticize her manners repeatedly in a series of instructions both of my girls can now parrot: 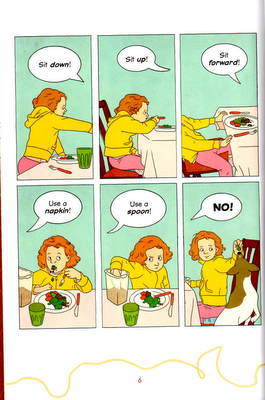 Her father asks, "What if you were eating dinner with the QUEEN?!"  Immediately, the doorbell rings, and it's a royal messenger, inviting Maya to come to dinner with the Queen at once.  She gets on the airplane (which has apparently landed in her backyard), still being admonished: "Put on a dress!"  "No time, no time!" the royal messenger says as he reaches up to turn the propeller manually.

The palace is pleasingly royal, and Maya, seated at the Queen's right hand, is surrounded by adults in fancy dress and faced with an array of disgusting foods (Snail Salad, Stuffed Tomato, Spinach Juice) and a tremendous number of utensils.  She asks for, and receives, pasta with ketchup, which she proceeds to eat with her hands.  Everybody stops and stares, including the Queen. 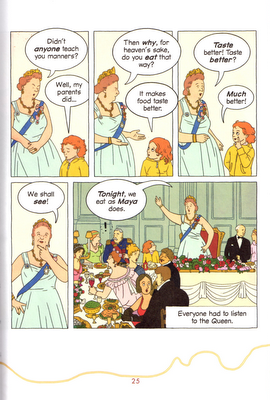 And so they do: 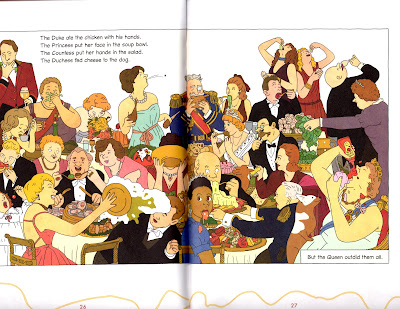 Turns out, it does taste better.  The Queen declares that everyone in the kingdom will now eat "as Maya showed us.  But only on holidays."  Maya is redeemed, and everyone is happy.

There's such a sense of loopy fun throughout the whole book.  It feels like a kid's fantasy, rather than an actual invitation to bad behavior.  Both Eleanor and Isabel have taken to quoting it throughout the day, and we have easily read it thirty times in the last week.  I've found Isabel more than once turning the pages and examining each picture by herself on the couch.  Toon into reading, indeed!