Isabel's drawing is spectacular!  Such an expressive two-and-a-half year old! In our household -- and maybe in yours? -- no was a crucial defensive weapon for the younger child.  It was Mona's first word.

No Jumping on the Bed has been a favorite -- both at home and at store -- for decades now.  It's pure fun.  Every now and then a customer rejects it because s/he sees it as sanctioning bad behavior, and thus deprives a child of a good exercise of imagination.  It's interesting that you posted those two books written and illustrated by Tedd Arnold.  They represent his Early Period of illustration -- the '80s airbrushy style of No Jumping -- and his Current Period.  The Current Period brings us cute monsters with bug eyes.  To celebrate the 25th anniversary of No Jumping, Arnold re-illustrated it in Current Period style: 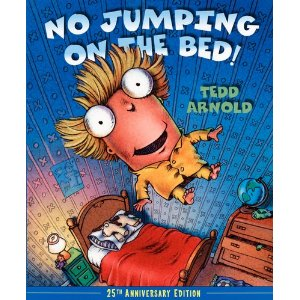 After 25 years of that smoothly-drawn child, I can't get used to this one.

Sometimes I get a bit stuck on a handful of recommendations because I'm so bonded to the books.  The question, "What's a good book for a three year-old who likes to be read to?" often gets No Jumping as the answer.  There's one other family favorite which is also a default choice for me:
Cloudy with a Chance of Meatballs by Judi Barrett.  (Amazing that we've been blogging for two years but have not discussed either of these wonderful books.)  A grandfather tells the story of a small town called Chewandswallow where all the food falls from the sky three times a day.  All is peaceful and cheerful, but then things start going wrong.  First, it's the menu:

The situation progresses to bigger and bigger food falling from the sky: a tomato tornado, dangerously large bread, and a pancake that covers the entire school.  Finally the villagers decide to leave town, on sailboats made of stale gigantic bread with giant cheese slice sails.  The story ends as it began, back in the real world with Grandpa tucking the kids into bed.

Here's a video reading of the book, done by an uncle:

My father (your grandfather) used to tell us stories about Pegasus, a flying horse (not much relation to the mythical one) which I've unfortunately long since forgotten.  But the feel of this book is very Grandpa-ish.  Kind of deadpan whimsical.  A classic.