With a 2-year-old and a 5-year-old in the house, every day is to some extent a No Day.  We hang the girls' drawings and paintings on one wall of our living room, in a rotating display, and one of the drawings up there right now is Isabel's interpretation of the intensity of "NO."  The words are hers, dictated; the "of course" on top was Eleanor's contribution. 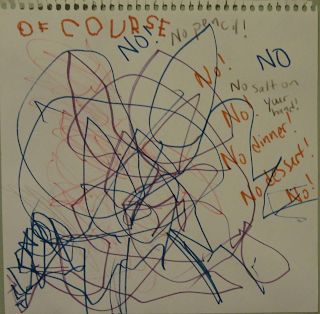 I'm reminded of two ridiculous, fun "No" books by Tedd Arnold, both of which center on jumping on the bed (one of Isabel's favorite pastimes) and being told not to.

Five Ugly Monsters is a retelling of that good old standard, "No more monkeys jumping on the bed," with monsters subbing in for the monkeys.  The monster-plagued boy keeps calling the doctor, who gets increasingly frustrated at being woken up, and finally rips the phone out of the wall to get some sleep.  The boy, deprived of his doctor's advice, takes on the monsters himself: "I called the doctor...[the doctor is sleeping soundly] and then I said, NO MORE MONSTERS JUMPING ON THE BED!"  Empowerment!  A reason for your kids to yell along with you in rhyming chorus as you read!  And really cute ugly monsters.

No Jumping on the Bed! is a more developed narrative.  It's the story of Walter, whose father tells him to stop jumping on the bed: "If I've told you once I've told you a million times, no jumping on the bed!  One day it'll crash right through the floor."  Of course, Walter doesn't listen, and two pages later his jumping does send him and his bed crashing through the floor into the apartment below.  What follows is a series of further crashes, as Walter goes down through several levels of his apartment building, through the rooms of a roster of characters with rhyming names.  At each level, he gathers the people and a variety of items from their apartments, so there's a pleasing element of repetition:
"Down and down fell Walter, Miss Hattie, Mr. Matty, Aunt Batty, Patty, Natty, Fatty Cat, the stamps, the TV, the spaghetti, the bed, and all."

There's a nice combination here of crashing violent destruction and lack of actual harm.  No one is hurt; in fact, each neighbor seems intrigued as well as somewhat disturbed by the falling people and debris.  It's good to see a picture book reflecting apartment building living (so many houses in picture books, sigh), though apparently each of these apartments has a totally different layout from the ones above and below, as Walter doesn't just fall through bedrooms. It's a good escape from reality.