Reading your post on ocean life reminded me of a wonderful book from my childhood: The Mother Whale, by Edith Thacher Hurd, illustrated by her husband Clement Hurd, of Goodnight Moon and Runaway Bunny fame. 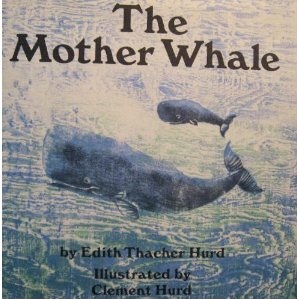 My memories of the book were dim -- it lives on the children's book shelves at my parents' apartment, and I haven't read it for a while -- but it stuck in my head, so I called my parents, and my mom found the book and read it aloud to me over the phone.

It is far more wonderful than I remembered.  The Mother Whale begins with a female sperm whale giving birth to her baby.  In clear, patient language, Hurd describes the scene:

On the flat blue sea there were only the white fountains of the whales.

The mother sperm whale rocked in the long slow waves of the sea, waiting.

The great sperm whale swam around and around. The bottle-nosed dolphins dove
in the blue sea and leaped in the sunshine.

At last it was time. The mother whale held herself still, her tail moved back and
forth. She balanced herself with her flippers. For one year and four months the
baby whale had been curled up and growing. It was now time for it to be born.

The baby whale was born slowly, first his tail, the two black flukes curled in at the
corners, just as they had been while he was growing inside his mother.

Last of all came the baby whale’s flippers and his huge head. He was a big baby. He
weighed two thousand pounds and was fourteen feet long.

The mother whale grunted and made singing noises as she swam close to her little
new calf. He moved his tail slowly and balanced himself with his flippers. He
shivered in the cold ocean water.

This tone continues for the rest of the book: both factual and fond, providing informative facts about and descriptions of whale life without anthropomorphizing the whales at all.  There's drama: the mother whale goes hunting in the deep sea, and encounters and eats a squid; the bull whale is challenged by a younger bull whale who wants to steal his harem (apparently, the word we use to describe a family group of whales).

The biology of whale life is discussed openly, so reading of this book to young children might open up some questions.  The baby whale nurses: "The mother whale turned on her side. Her baby nuzzled her belly. He drank her warm milk, gallons and gallons and gallons of warm rich milk." There are references late in the book to the mother whale and the bull whale mating to create a new baby (in the picture, the whales are touching, but the important bits are covered in a swirl of white water).

While The Mother Whale is out of print, there seem to be a number of used copies out there, and several of Edith Thacher Hurd's 75 children's books are still in print (though not, it appears, the other books in her Mother Animal series, which includes The Mother Kangaroo, The Mother Chimpanzee, and The Mother Owl).

Perhaps a gift for Mother's Day?