L. Frank Baum is always interesting on gender issues, but The Marvelous Land of Oz is definitely where he's most out-there.  His wife and mother-in-law were both very strong feminists, which leads critics to believe their influence led to his many strong female characters.  I've never been sure, though, how to interpret those girls with knitting needles and their strange revolution.  Is it a statement about the absurdity of women's political movements?  Or just a good plot device?

As for A Cricket in Times Square, I love that Eleanor picked up on the language variation right away.  Yeah, but for us grownups it sure is wildly uncomfortable.  Sounds like you handled it very smoothly.  One of the many wonderful elements of reading with your children: you get what one of my girls' preschool teachers called "opportunities" to unravel tangles you hadn't anticipated.

I stumbled upon a strange and interesting article last week which found a political message in post-WWII kids' books about construction equipment.  "Unearthing Benny the Bulldozer: The Culture of Clearance in Postwar Children's Books"* by Francesca Russello Ammon argues that massive urban renewal, new building, and the expansion of highways were all preceded by massive destruction: of old structures, terrain and the environment.  The dominant postwar culture, she argues, celebrated this destruction in many forms, including turning construction equipment into anthropomorphized heroes in kids' books.  She cites Benny the Bulldozer, a 1947 book by Edith Thacher Hurd and Clement Hurd (quite recently in this blog for their Mother Animal books) in which Benny agrees to clear the way for a new highway.  He ends up leading a triumphant July 4th parade celebrating the construction.

The simultaneous ascension of both the bulldozer and "bulldozer books" was no accident, but reflected parallels between the landscapes of fact and feeling.  The books reflect the social, political and cultural preoccupations of their era, helping a younger generation to make sense of the world as their environment underwent massive physical upheaval....
By putting a happy face on demolition for their readers, the books subtly endorse the "culture of clearance" -- that is, the ideology, technology, policy, and practice of clearing the landscape of its natural and built environment.

I haven't managed to find Benny's text online or in the local library.  She also cites the 1952 Buster Bulldozer, from which I found this, which supports her point: 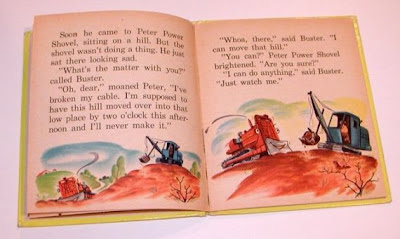 Mike Mulligan and his Steam Shovel by Virginia Lee Burton tells the story of Mary Anne, a steam shovel celebrated for digging canals, cutting train tunnels through mountains, and "lower[ing] the hills and straighten[ing] the curves to make the long highways for the automobiles."  In the book, she digs the cellar for a new town hall in one day, triumphing over doubters.  The problem with including this one in Ammon's thesis, however, is that it's decidedly pre-war, published in 1939.  But it definitely sees re-shaping the landscape as a sign of progress.

Ammon's article, which seems to be a chapter in her PhD. thesis, reminds me a bit of the analyses that argue the imperialist nature of the Babar books and Donald Duck.  I find them all very engaging, an interesting frame through which to observe the familiar.  But the destructive construction equipment frame cuts off the intrinsic fascination of big machinery for kids.  And in a era when bulldozers were doing destructive stuff like moving hills, a sympathetic bulldozer with eyes and smile isn't necessarily a propaganda tool as much as an object of interest in a child's world.

Fun to think about, though.

* Can't find full text online.  I read it in Technology and Culture: the international quarterly of the Society for the History of Technology. V. 53 #2.
Posted by Deborah at 10:05 PM