All this talk of school makes me think of two of my favorite books about math.  Math education was a big surprise to me as a parent: the pedagogy had evolved hugely in the 40 years from my school days to those of my children.  The foundations of mathematical thinking are emphasized now, especially in the lower grades: patterns and concepts trump tables, big time.  From kindergarten up, Halloween became math homework as the girls would dump their loot on the floor and sort and classify it and create graphs about what they got.

The idea that one can arrive at an answer in math through many different routes is central.  My favorite book on this subject is
Five Creatures by Emily Jenkins. She wrote it ten years ago, before her wonderful forays into early chapter books and YA chick lit.  The cover of the book shows the five creatures: a girl, her parents, and two cats.

It goes on to classify many things that characterize some but not all of the household.  My favorite spread is "Three who can button buttons [girl looking proud].  Four who can open cupboards [parents trying to shoo cats from cupboards, girl looking forlorn on the floor]."  Math as part of the entertainment of life is what cheers me up about this approach.

And for an older -- say, third grade and up -- child, there's the amazing
The Number Devil: A Mathematical Adventure, by Hans Magnus Enzensberger (translated from the German).  It's the story of Robert, who on twelve different nights is visited in his dreams by the number devil, whose job is to explain the basic principles of mathematics.

On the first night, Robert and the number devil discuss the number one, with the help of some chewing gum and many mice.  Zero and negative numbers come along on the second night.  The third night is prime numbers: the chapter during which both of my daughters separately jumped out of bed and found paper and pencil to figure out prime numbers as explained by the devil.

The sixth night is Fibonacci numbers (explained with rabbits, of course), which any self-respecting  third grader knows about these days.  Then the book launches into things which are comprehensible during the explanation, but for me they're like relativity: I can retain them for only an hour or two without getting muddled.  But it's written so engagingly, the higher concepts really are comprehensible.  On the seventh night, the number devil builds Pascal's Triangle 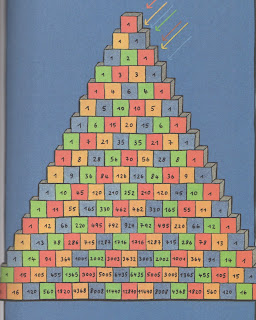 Honest, this is stuff a third-to-sixth grader can understand.  Take, for instance, the R entries in the index:

And the number devil is such an annoyingly likable guy:


"You probably think I'm the only one," said the number devil the next time he turned up, perched on a folding chair in the middle of a vast potato field.
"The only what?" asked Robert.
"The only number devil.  But I'm not.  I'm one of many.  Number Heaven, where I come from, is teeming with us.  I'm not even one of the bosses.  The bosses do nothing but sit and think.  Now and then one of them will laugh and say something like 'Rn equals hn factorial times f of n open bracket a plus theta close bracket,' and the others nod and laugh along.  There are times when I don't understand a thing."
"You poor devil," Robert said.  "Here I though you were so sure of yourself."
"Why do you think they send me out at night?  Because the bigwigs have things to do other than visiting apprentices like you."
"So I'm lucky to have even you.  Is that what you're saying?"

It's a delightful read.

Deborah
Posted by Deborah at 11:36 PM