Such good choices of books about school!  I would add two to your list -- one from each author you mention:

Officer Buckle and Gloria by Peggy Rathman is a hilarious send-up of boring elementary school assemblies.  Officer Buckle speaks to kids on safety tips and puts them to sleep with his delivery. One day he brings along Gloria, a dog who has wandered into the police station.  Gloria is a natural ham, acting out the oblivioius Officer Buckle's safety tips behind his back.  "Never leave a thumbtack where you might sit on it," inspires Gloria to jump in the air with a pained expression on her face.  The audience loves her, and Officer Buckle becomes hugely popular.  He discovers what she's been doing when a news crew does a story on them. "Do not go swimming during electrical storms," he says, while Gloria fluffs her fur in a shocked-looking way and the kids cheer.  Officer Buckle is hurt and offended and stops his speaking tours.  All comes out right in the end, with the two remaining fast friends.

I tend to discourage this one as a book for pre-schoolers because knowing what an assembly is makes it so much funnier.  But it's a good laugh for anyone.

Chester's Way, by Kevin Henkes, isn't a school story, but it's the book that introduces the indomitable Lilly. Chester and Wilson have a very quiet friendship filled with charmingly rigid habits.  It makes them both happy, in a quiet sort of way.  Then the flamboyant Lilly moves into the neighborhood.  They can't handle her at all, until her over-the-top behavior scares some bullies away from the quiet boys.  They all become fast friends: 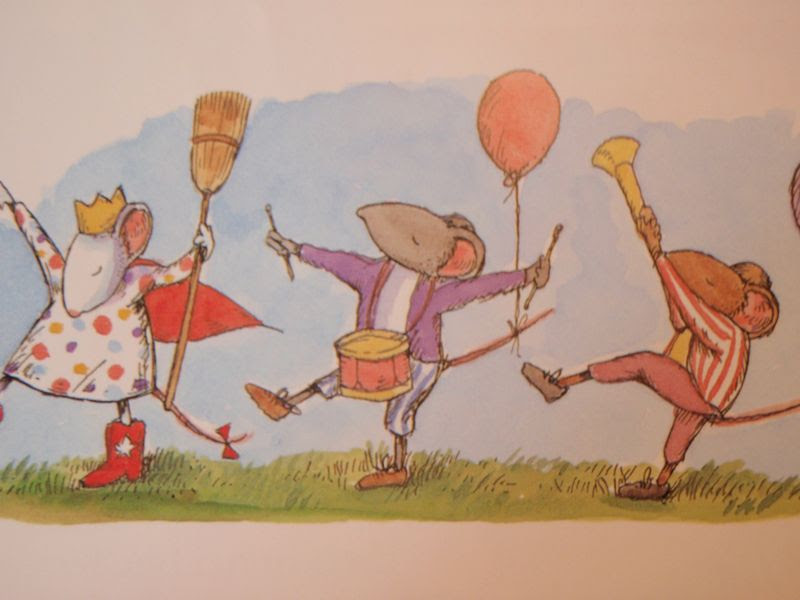 She goes on to the plastic purse, which may be her best moment, and Lilly's Big Day, which disappointingly emphasizes her overbearingness and leaves out her conscience.  And of course good old Lilly is the big sister in Julius the Baby of the World.

Both these authors put lots of thought, skill and humor into all the illustrations, offering new discoveries on many re-readings.  A delight.

All this talk of school somehow has made my mind wander to math.  Will post on two good stories about math next time.

Deborah
Posted by Deborah at 10:24 PM