Here we are, back to school once again.  Mona flew off to her junior year in college today; Lizzie's already in her second week of classes.  Eleanor's in a new pre-school.  And you must be in full swing at Stuyvesant.

I've had a nice little reminder of the store's connection to its community in the past week.  Our local  middle school assigned a book on the first day which I was able to order quickly.  Someone posted on a school listserv that we had it, and we've had a parade of folks coming in to buy it.  It's very satisfying to have that connection to a nearby school and its parents.

So I've been thinking about community and neighbors, and yet another Shirley Hughes book seems appropriate here.  Four of them, actually, collected into Tales of Trotter Street, currently out of print, alas.  Each story focuses on a different family living on the same block, but members of the other families have minor parts.  I've written about one of them, Angel Mae, which is both a Christmas book, and (since you asked) the only book that pops into my head which presents school as part of life, rather than an anxiety-provoking task.

The Trotter Street Tale that was read and re-read in our house was The Big Concrete Lorry.  It's about the five-person Patterson family, who decide to add a room onto their house rather than move to a bigger house away from Trotter Street.  They shop for plans, buy supplies, and, with the neighbors' help, dig a foundation.  The next day, when they're still recovering from all the digging, the Jiffy Ready-Mix Concrete Co. lorry appears:


Out jumped jolly Joe Best.  "Load of concrete you ordered!" he called cheerfully.
"Not this morning, surely?" said Mum.  "I'm sure we didn't. . . "
But it was too late.  Jimmy had already pulled a lever and the big drum poured out a load of concrete, all in a rush.  Slop!  Slurp! Dollop!  Splosh! Just like that!  It landed in a shivering heap right outside the Pattersons' front door.

The concrete has to make it to the foundation in the back yard of the rowhouse before it sets.  Dad wakes up.  Mum starts wheeling loads through the house, and the kids run for the neighbors: 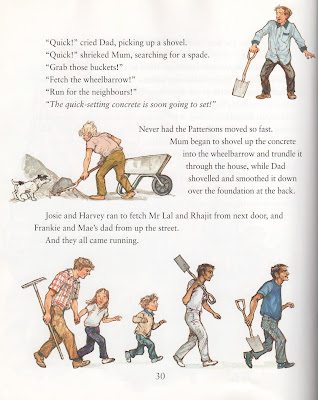 Everyone runs to help, there's a frenzied paragraph of "labouring and struggling," and the concrete gets moved.  A small hill remains on the front sidewalk: "it was great for sitting on and racing cars down.  And if you climbed up and stood on the top, you could see right to the very end of Trotter Street!"

So here's to neighbors and helping each other out: one of those lessons best absorbed in the context of a good story.

Deborah
Posted by Deborah at 11:57 PM