Dear Aunt Debbie,
Books like Good Night, Gorilla, Ten Minutes Till Bedtime or Chickens to the Rescue, with their illustrations which reward close examination, are great vacation companions.  There is something to be said for a book which can take a pleasantly long time to read. 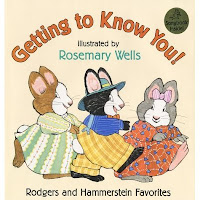 On that note, one of the other greatest hits we’ve brought along with us is a songbook.  Getting to Know You!: Rogers and Hammerstein Favorites is a most excellent compendium of songs from, you guessed it, Rogers and Hammerstein musicals, illustrated by Rosemary Wells.  (As you can see from the Alibris link, it's out of print, but findable.)  The songs come from four shows: Oklahoma!, South Pacific, Carousel, and The King and I.  The book came from my cousin (your niece) Ona, who knows how much we love 1950s musicals.  Rogers and Hammerstein have always been particular favorites for me; they were my lullabies as a child, and I’ve sung them to Eleanor and Isabel since the day they were born, as my father sang them to me.  My mother can boast that she attended the original Broadway production of Oklahoma! in utero; I’m sure it had an effect.
In much the way that she imbued several volumes of Mother Goose rhymes with her own joyful, quirky animal spirit, Wells does a terrific job here.  “The Farmer and the Cowman” who should be friends are dancing, dressed-up buffalo; “Happy Talk” is a romance on a tropical island between two furry guinea pigs; “This Was a Real Nice Clambake” boasts dancing clams as a border around a picture of some very satisfied looking dogs.
The lyrics as represented on the pages of the book are often incomplete – there isn’t room for all three verses of “Surrey with the Fringe on Top” – but a small songbook is tucked into a pocket in the back cover.  Here, you’ll find the sheet music and complete lyrics to all the songs included in the volume.  It’s a nice way to brush up on your recollection of the tune to the bridge of “Mister Snow.”  Or, of course, you can just read the lyrics aloud, as poetry:
His name is Mister Snow
And an upstanding man is he
He comes home every night in his round-bottomed boat
With a net full of herring from the sea.
An almost-perfect beau
As refined as a girl could wish
But he spends so much time in his round-bottomed boat
That he can’t seem to lose the smell of fish.
The first time he kissed me, a whiff of his clothes
Knocked me flat on the floor of the room.
But now that I love him, my heart’s in my nose
And fish is my favorite perfume!
Both Eleanor and Isabel are in love with this book.  Isabel calls it “Happy Talk book,” and her requests for it, at top volume, are the reason the hardcover made it into our traveling bag.  It's worth the weight.
Love, Annie
Posted by Annie at 11:08 PM