I love the image of Grandma reading to you, Uncle Allan, and my mom every night over dinner.  I wish I'd had the chance to know her as an adult, and that Lizzie and Mona had been able to meet her.  What an amazing woman she was. 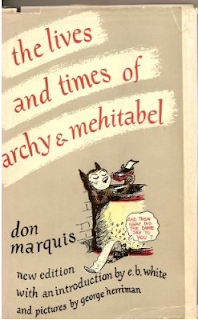 It's interesting to hear that archy and mehitabel were part of Grandma Helen's legacy to you.  They came to me as a gift from my parents' dear friend Sally, another brilliant, articulate woman who helped shape my early life. (The picture here is of the edition I have on my shelf, well-loved and ragged.) Sally died of cancer two months after Grandma did, the year I turned 14.

What is so amazing about archy and mehitabel?  His plain-spokenness; her tremendous attitude and appetite for life.  The image of archy, a poet whose soul has transmigrated into the body of a cockroach, being thrilled that Don Marquis left a sheet of blank paper in his typewriter that first night, and working so hard to jump up and hit his head on every typewriter key individually to spell out his thoughts.  There are a few poems where he asks Marquis to leave the caps lock on, and his extreme joy in being able to write in capital letters for once leaps off the page.

I memorized and recited "the song of mehitabel" for a forensics class during my sophomore year of high school (not sure what my classmates made of it, but wotthehell, wotthehell).  But my favorite archy poem will always be this one, which brings to mind both Sally and Grandma:


takes talent
there are two
kinds of human
beings in the world
so my observation
has told me
namely and to wit
as follows
firstly
those who
even though they
were to reveal
the secret of the universe
to you would fail
to impress you
with any sense
of the importance
of the news
and secondly
those who could
communicate to you
that they had
just purchased
ten cents worth
of paper napkins
and make you
thrill and vibrate
with the intelligence
archy
So true.
Love, Annie
Posted by Annie at 11:02 PM

Email ThisBlogThis!Share to TwitterShare to FacebookShare to Pinterest
Labels: Marquis