Searching for home and child in Robert McCloskey

I love the Look-Alikes idea -- reminds me of the pleasure we've all gotten around this house from figuring out what the vegetable people and scenes are made of in Food for Thought.  The most fun we've had with a searching book recently was with Adele and Simon; the Waldo and Chaffy books look like a good time for the future.

Make Way for Ducklings has everything going for it.  It's the story of a couple of ducks, Mr. and Mrs. Mallard, who are looking around Boston for a place to build a nest and raise their children.  There's wonderful Boston detail throughout, most notably in the depiction of the Public Garden, where the Mallards encounter a Swan Boat and think it's just incredibly stuck-up not to speak to them.  There are their eight children's fabulous rhyming names.  There's a kind policeman named Michael who feeds them peanuts and, in the climactic scene, holds back traffic so the ducklings can cross the street.  Most of all, there are McCloskey's extraordinary, closely-observed illustrations of the ducks and ducklings themselves.  I'm pretty sure they're rendered in charcoal; the shading is tremendous.  My favorite is a two-page spread of Mrs. Mallard teaching the ducklings how to swim and dive.  Each duckling is rendered so individually: one distracted by a bug in the air, one peeking out quizzically from behind his mother's back, one starting up in the water, tiny wings extended. 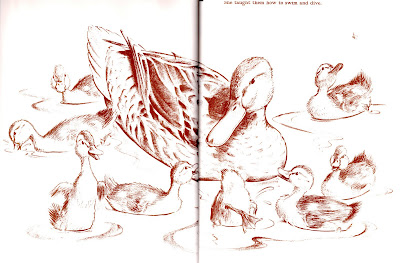 Then, of course, there's the absent-father moment.  Jeff and I have always enjoyed reading this bit aloud in a light, dry way:


One day the ducklings hatched out.  First came Jack, then Kack, and then Lack, then Mack and Nack and Ouack and Pack and Quack.  Mr. and Mrs. Mallard were bursting with pride.  It was a great responsibility taking care of so many ducklings, and it kept them very busy.
Next page:


One day Mr. Mallard decided he'd like to take a trip to see what the rest of the river was like, further on.  So off he set.  "I'll meet you in a week, in the Public Garden," he quacked over his shoulder.  "Take good care of the ducklings."
"Don't you worry," said Mrs. Mallard.  "I know all about bringing up children."  And she did.
Ah, feckless Mr. Mallard.  Ah, 1941 gender relations.

In Blueberries for Sal, there are no fathers mentioned at all: it's a strictly mom and kid book.  The drawings here are pen and ink, all the shading accomplished with closely-gathered lines, the color a dark blueberry blue on white.  It's the story of Little Sal, who goes to pick blueberries on Blueberry Hill with her mother, and Little Bear, who goes to eat blueberries on the other side of the hill with his mother.  Each child falls behind and temporarily loses his or her mother, then begins to follow the wrong mother.  There's no fear or anxiety associated with these moments of getting lost: Little Sal looks eagerly for her mother ("She heard a noise from around a rock and thought, 'That is my mother walking along!'"), but tramps along happily behind Little Bear's mother when that is where she finds herself.

Each mother quickly notices something is wrong when the child behind them does something surprising: the blueberries Sal drops in her bucket go "kuplink, kuplank, kuplunk!", while Little Bear gulps two Tremendous Mouthfuls of berries from Little Sal's mother's bucket.  One of my favorite moments in the book is the matching parenthetical description of each mother's immediate, backing-away reaction: "(She was old enough to be shy of people, even a very small person like Little Sal.)" and "(She was old enough to be shy of bears, even very small bears like Little Bear.)" Mothers are reunited with children, everyone finishes gathering and eating their blueberries, and all is well.

Sal doesn't say a single word in the book, but she is marvelously physical: she tromps around, squats to pick berries, observes the world around her with a perfect little-kid focus.  In the two-page spread which begins and ends the book, Sal and her mother are at work canning the blueberries in their Maine kitchen.  The way Sal stands on her chair, methodically arranging the rubber seals for Mason jars along her arm and a large spoon she's holding, as her mother calmly pours cooked berries into jars, floors me. 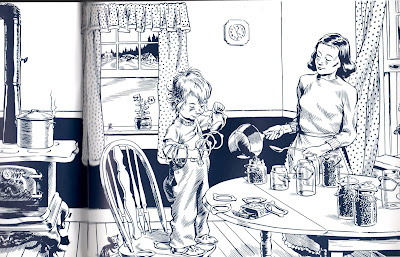 Email ThisBlogThis!Share to TwitterShare to FacebookShare to Pinterest
Labels: McCloskey