Yes! I sell comic books!  Most of them are Graphic Novels these days and they come in many layers of complexity, reading levels, and quality.  We recently expanded our graphic novel section -- I still find some of it beyond me (don't know if I'll ever figure out manga, although I try).  So today I'll only talk about three.


American Born Chinese is great, and it was such a lovely moment when it won the Printz Award for YA books a few years back. You probably already know The Arrival, by Shaun Tan (which Indie Bound doesn't seem to list, so the link is to the author's site) but especially with your student demographic (many first and second generation immigrants, right?) it would fit right in.  It's a stunningly beautiful wordless book which puts the reader inside of the immigrant experience in a fantastical world where everything is just, well, different. Here, for example, is the harbor where the main character arrives after leaving his family behind:

All is strange to him: he can't read the designs on signs, the food is unfamiliar, he doesn't know where he's going.  But other people -- usually other immigrants --  help him out.  He has come from a world of poverty and hunger, symbolized by the shadows of dragons we see in the city he left.  His new friends describe to him why they fled their homes, the most disturbing image being this one:

One can linger long over every page.  There's tons to think about.  I never understood some of the elements in the story (why did they have those animals in the baskets?), but that can be part of the immigrant experience too: you never entirely get the new culture.

Then there's
Smile, out this year.  It's a memoir by Raina Telgemeier about her years of oral surgery and orthodontia following a bad fall after a Girl Scout meeting.  At the same time, she's going through middle school with difficult friends and hard social situations.  She finally comes out of it all satisfactorily, but it's a sometimes painful ride that feels very emotionally spot-on.  Raina endures clueless doctors who seem so true-to-life I found myself remembering the orthodontist's office from my childhood -- not to mention all the people we dealt with through Mona's orthodontia and jaw surgery.

For the younger set, a starter chapter book/graphic novel:
Travels of Thelonious by Susan Schade and Jon Buller. It's the first in The Fog Mound series, a post-apocalyptic fantasy for the 8 to 12 year-old crowd.  Buildings exist, but no people.  Animals talk, and the ones who live where people used to live wear clothing.  The book is both a chapter book, with pages with a normal type layout, and then it breaks into comic book format for four or five pages, then back to regular type.  The story follows Thelonious, a chipmunk from the country, as he comes to the big city and finds friends to help him: 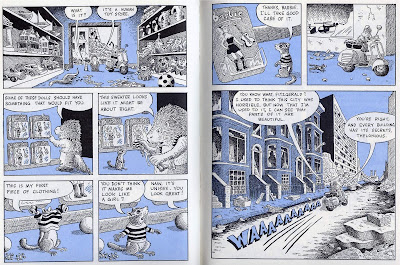 Thelonious wants to find out if the old legends about humans running the world are true.  He and friends go on an odyssey that appears to have concluded with the third book, but in this era of sequels, one can never tell..

Deborah
Posted by Deborah at 7:18 PM