Book Blogger Appreciation Week keeps being interesting.  We received a comment two posts ago from Sam of Sam and Boo Book Reviews, who I suspect found us through BBAW, which she's been participating in.  Sam is the mother of Boo, a book-loving toddler on the autism spectrum.  In addition to the fact that Sam shares our taste in Blogspot templates, she cares very deeply about both parent and child enjoying reading.  At the end of her book reviews, Sam adds a paragraph on how the book can be useful with autistic kids.

I don't have a lot of experience with autistic kids, although I'm constantly impressed with their parents' understanding and resourcefulness.  One book that taught me a lot about raising an autistic child, to get back to one of our threads, is a graphic novel:
With the Light: Raising an Autistic Child, by Keiko Tobe. It's a serialized story that Tobe started writing in Japan in 2000, and it's still going.  It follows one family from the birth of their first child, Hikaru, through his diagnosis of autism, then through his childhood. In the U.S. Volume 7 has just been published, in which Hikaru is a young teenager.  In the first book, Hikaru's different behavior from other babies creates tensions within his parents' marriage, exacerbated by a mother-in-law who feels the mom is doing something wrong.  When they finally figure out he's autistic, the father can't handle it and leaves, but he later returns and remains an involved parent through Hikaru's childhood.  As the parents learn more about Hikaru, the reader is educated also.  There's the search for a good school and teacher, the heartbreak of the good teacher leaving, the many challenges of everyday life.

It's basically a soap opera with very interesting content.  It's still manga, with those big-eyed women and gender roles which occasionally make me cringe.  The books available in the U.S. are huge -- several inches thick.  They're collections of the small comic books which were published serially in Japan, so one has to adjust to a certain amount of repetition.  And they're manga,  reading from the right side to the left.  This is one of those summarizing pages: start at the upper right corner of the page on the right: 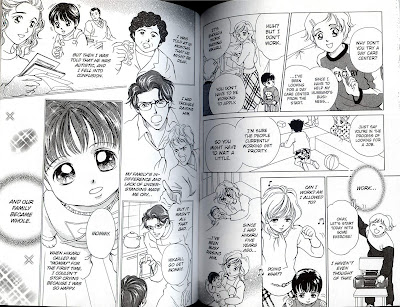 It's not a kids' book, although I suspect some teenagers would find it interesting.  A former colleague of mine from the store has a son who is on the autism spectrum.  She really liked With the Light because she felt it was a very accessible way to educate her friends and extended family about autism.  And that's often why parents of autistic kids buy it: to give to people they care about.

In the past few years, there have been several quite good novels with autistic characters for middle grade and teenage readers.  Another time, I'll go there.

Deborah
Posted by Deborah at 11:53 PM