Saffy's Angel: clearly another book to put on my library list.  You are turning me into a reader of YA books again.  Just whizzed through Catching Fire, the second book in the Hunger Games trilogy, and am already biting my nails for the third book to be released.  YA fiction can be so intensely gripping.

But YA books aren't the only ones that deal with dark themes.  I mentioned a month ago that we'd been reading Eleanor a gorgeously illustrated version of Rapunzel (retold by Barbara Rogasky, illustrated by Trina Schart Hyman); last week, we bought another Rapunzel, this one retold and illustrated by Paul O. Zelinsky.  Again, it was the illustrations that drew us to the book: Zelinsky's oil paintings have a Renaissance feel, really stunning.  Where Trina Schart Hyman's illustrations are lush and storybook: 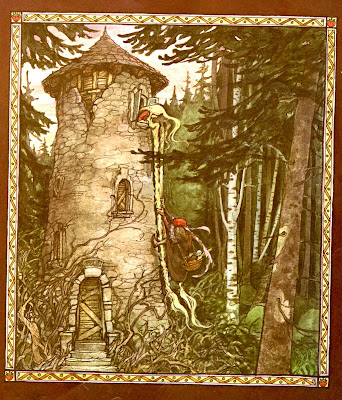 Zelinsky's are crisp and dramatic: 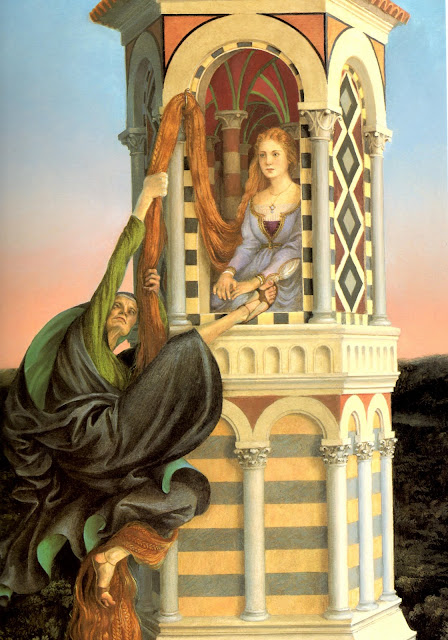 Much of the story is the same in both books, including the difficult parts: the parents losing their child to the witch; Rapunzel being locked in the tower, the prince's fall and blinding after the witch catches him.  The main difference between them is the way in which the witch (sorceress, in Zelinsky's version) finds out about the prince.  In Rogasky's telling, Rapunzel is weaving a ladder from pieces of silk the prince brings her, so they can escape together:

After some time, the ladder was almost finished, and Mother Gothel still knew nothing.  But one day, when Rapunzel had watched the witch make her clumsy climb to the tower room, the girl forgot her secret.
"Mother Gothel," she said, "how is it that it takes you so long to climb up here when the king's son does it so fast?"
"Oh, wretched girl!" The witch flew into a rage.  "Wicked, ungrateful child!  I thought I had hidden you from all the world.  I thought I had given you all your heart could desire.  And now you have betrayed me!"

In Zelinsky's retelling, there is no escape plan, and he mentions that Rapunzel and the prince hold a marriage ceremony for themselves on the first night the prince visits.  Time passes, and then:


One day when the sorceress entered the tower, Rapunzel said, "If you please, Stepmother, help me with my dress.  It is growing so tight around my waist, it doesn't want to fit me anymore."
Instantly the sorceress understood what Rapunzel did not.  "Oh, you wicked child!" she shrieked.  "What do I hear you say?  I thought I had kept you safe, away from the whole world, but you have betrayed me!" 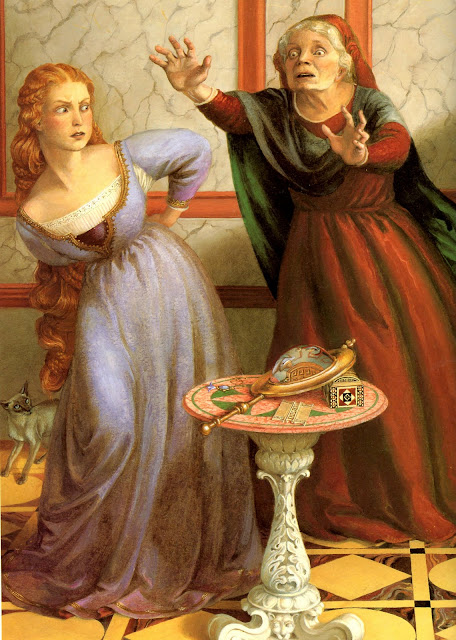 Check out the convex mirror on the table, reinforcing the pregnancy theme.

In the first version, Rapunzel comes off as a little dumb; in the second, she's a sexual innocent, and the revelation of her love is something she couldn't possibly suppress.  Reading this version prompted Eleanor to ask, as she didn't when the Rogasky/Hyman Rapunzel had twin babies in the wilderness, "How did she get pregnant?"

Fairy tales are so elemental, so stark.  Abandonment, death, marriage, childbirth.  I love them, and so does Eleanor, but it's a little bizarre that they are among the first stories we tell our children.  If these themes appeared in contemporary children's books, would anybody read them?  Is it our own familiarity with certain stories that allows us to comfortably introduce them to our children?