We've left the hammocks of Maine and are back in DC, at least for a few days -- until we see you at yet another amazing cousin wedding on Friday.

While the four of us were together, we realized how many times we use little phrases among ourselves that come from books we read years ago.  I think many families have these mutual reminders of things that resonate in books.  Here are some of ours:

Not your usual conversational gambit, but it comes up surprisingly often around here.  It's from a long-out-of-print reader called Webster and Arnold and the Giant Box, by P.K.Roche.  It has to do with resisting an overly-controlling older sibling:

They eventually reconcile and keep playing, of course. And we keep using wick-ee wick-ee when we hear something that sounds a little off, or during a countdown, or when Ka-pow on its own just isn't quite enough.

"Carry me, carry me!" (in whiny tone)
From one of our favorite Christmas books (also out of print, alas): Angel Mae, by the excellent Shirley Hughes. Mae is a pre-schooler who lives in a walk-up flat with her very pregnant and frequently tired mum: 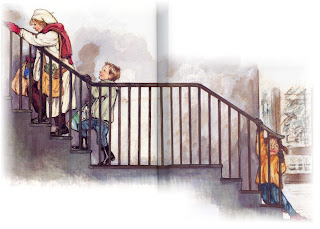 "Mae got tired too.  She wished she could be carried like a shopping bag.
'Carry me, carry me,' she moaned, drooping on the banisters at the bottom step.  But Mum couldn't carry Mae and the shopping.  Mae was much too old to be carried anyway."

Even when your children are taller than you are, they can get great satisfaction in expressing fatigue with Mae's eloquent moan.


"Don't call me darling -- I'm a driving instructor."
A great line from Saffy's Angel, and one which we've used more in the post 16 year-old years.  It's said with a British accent.

"Sorr-eee, Harr-eee" (British, accent on second syllable)
This is from the great Jim Dale recordings of the Harry Potter books -- a phrase Hermione uses in sing-song inflection throughout all seven books.  Used when apologies come up.  This one escapes my lips most frequently when I'm in public, leading to the occasional funny look.

Another of the joys of reading a lot with one's children.

Deborah
Posted by Deborah at 10:17 PM