Happiest of holidays! I'm so glad to hear that things are humming along at the store, despite the odd objection to stories that are "too sad."

As we head into the school break, I wanted to highlight a couple of books we've recently fallen in love with, excellent reading for both kids and adults.

The kid appeal: both are graphic novel memoirs (have I mentioned we're a little obsessed with graphic novels?), both focused on the early to middle childhood years of the author/protagonist, both full of humor and intelligence and drama, both featuring smart, creative girls.

The adult appeal, especially to adults around my age: the major action in both books takes place in the 1970s and 1980s, so they have a real time capsule quality (walkmans! slouchy socks! the San Francisco earthquake! the Waltons!).

Book number 1 is from our beloved Raina Telgemeier, author of Smile and the Rapunzel story in Fairy Tale Comics. Sisters is billed as "the companion to Smile." In Smile, Telgemeier focused in depth on her fraught dental history (she knocked out her adult front teeth in an accident, and years of surgery and complicated braces followed). In Sisters, the braces take a back seat, and Telgemeier focuses on her fraught relationship with her younger sister, Amara.

The frame story puts Raina, Amara, their younger brother Will, and their mom in a minivan on a road trip from San Francisco to Colorado for a family reunion. Bickering abounds, and frequent flashbacks (with the pages tinted slightly yellow, to make it clear what's a flashback and what is present day) expand on the sisters' history. It feels like such a real family -- the back and forth among the siblings, expert at pushing each others' buttons, the ways in which small moments of connection break through. Amara loves all nature, including lizards and snakes; Raina thinks they're disgusting, and a snake figures prominently in one of the book's later scenes. The road trip offers a chance for the sisters to take stock of their relationship to each other, and to realize that their parents' marriage is in trouble. It feels like a pivotal summer.

Isabel bought Sisters at her school book fair, and we must have read it 12 times through in the first week. Both Isabel and Eleanor identified with the family deeply (two sisters! who bicker! and their brother is also named Will!), though thankfully there is no parental tension looming on the horizon in our house. We took Smile out of the library not long afterward, and we have now read it at least as many times. Telgemeier's illustrations are a little goofy and totally expressive, and she's able to explore complicated emotional material in clear and accessible ways. An absolute hit. 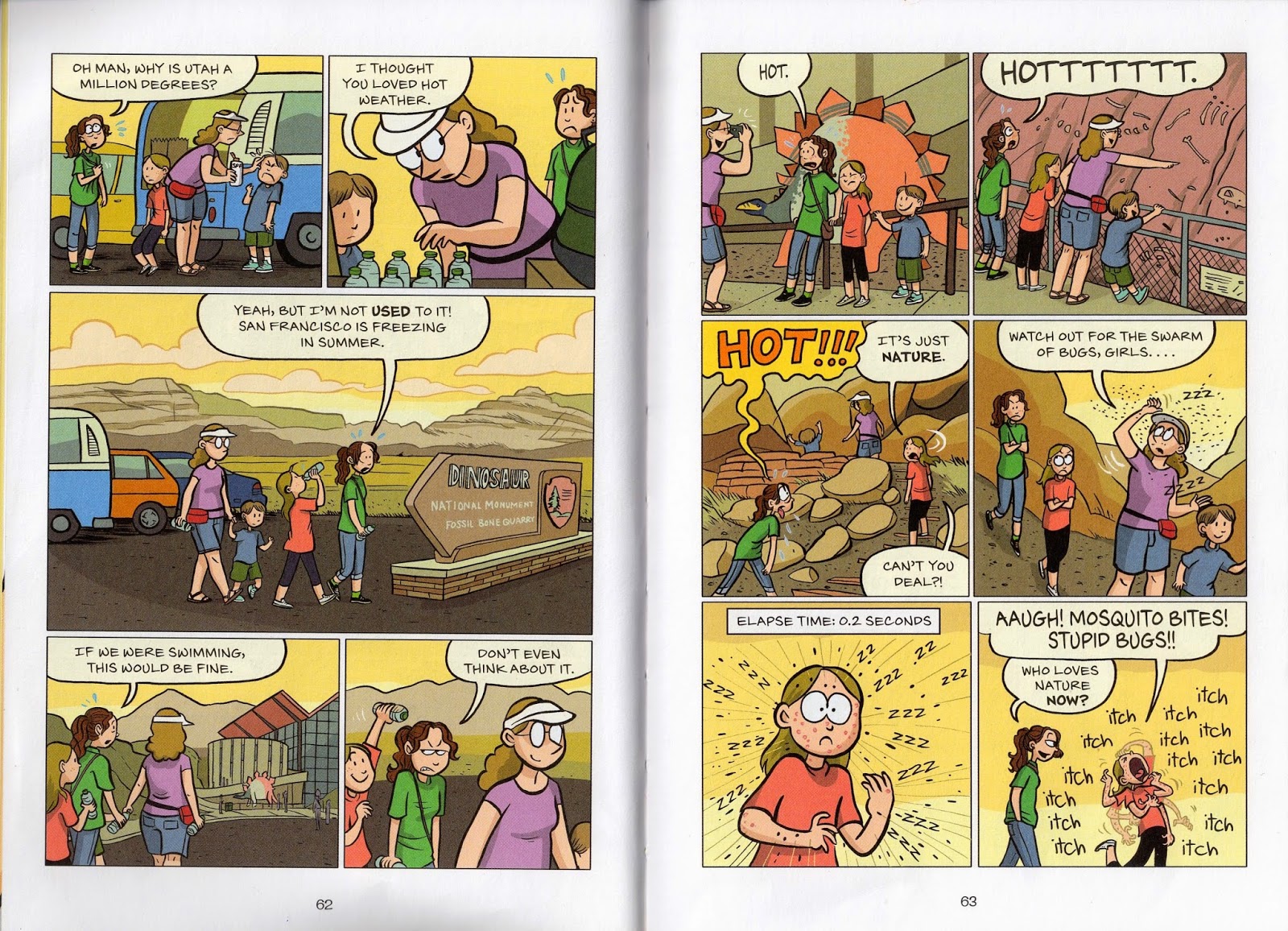 Book number 2 captured Eleanor before Isabel.  In El Deafo, Cece Bell tells the story of losing most of her hearing at age 4 after a bout of meningitis. It's the mid-1970s, and she's outfitted with two different hearing aids, both enormous by today's standards: a smaller one for home, and the large "Phonic Ear" for school. The people in El Deafo are depicted as rabbit-like creatures, with long ears, so the wires connected to the hearing aids are extremely visible, as Bell says they felt to her as a child.

Cece wears the Phonic Ear as a box hanging around her neck (underneath her overalls, which she wears every day to hide the box). Her classroom teacher wears a microphone, which allows Cece to hear her speech far more clearly. It turns out that the microphone is quite powerful, allowing Cece to hear her teacher anywhere in the building: in the teacher's lounge, even in the bathroom. This, then, is her superpower. Cece fights off her feelings of loneliness and difference by imagining herself as El Deafo. 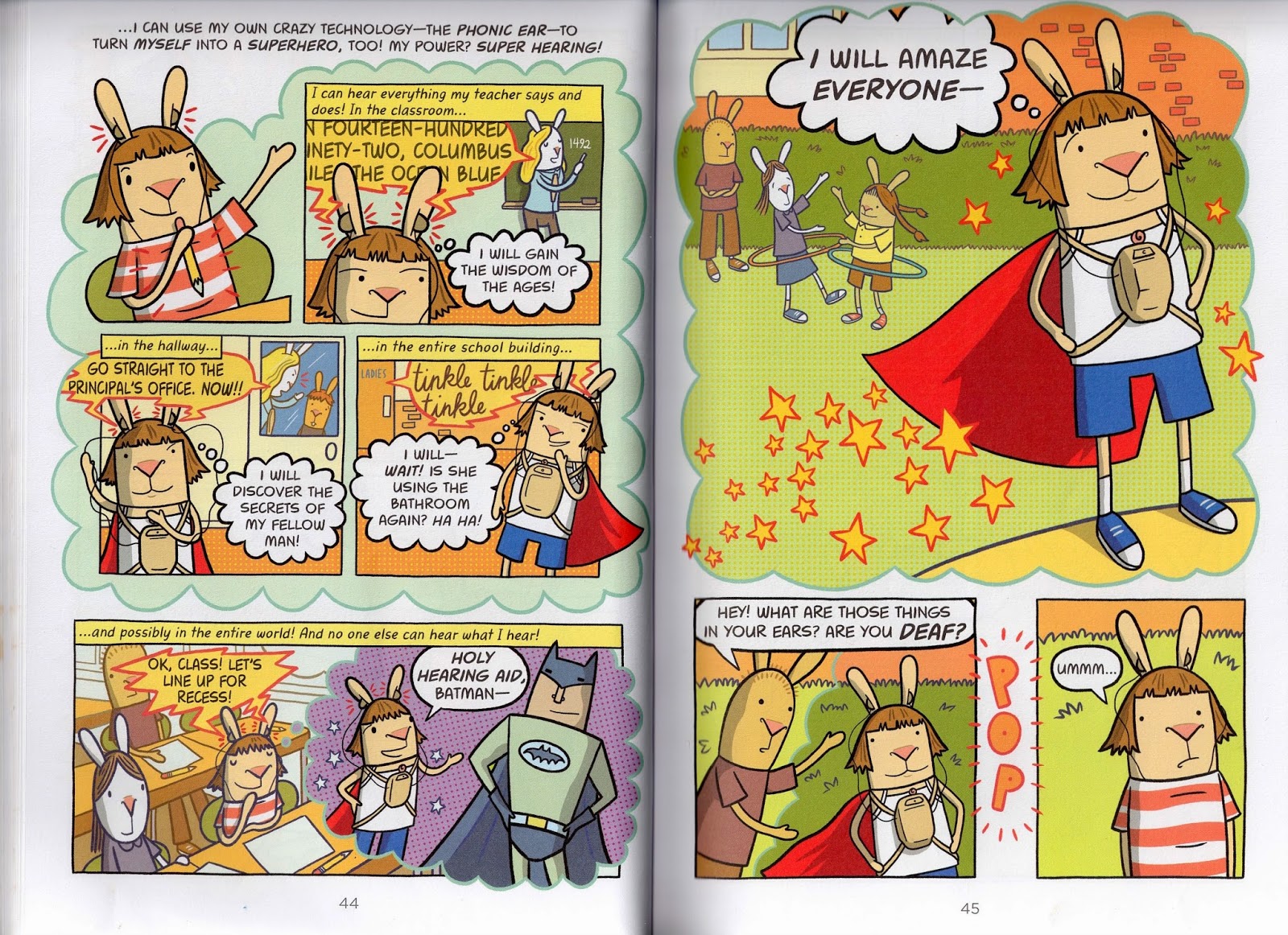 El Deafo, which came as a gift from you, resonated for me because of the history of deafness in my family: as we've written about before, both of my father's parents were born deaf, and communicated largely through lip-reading rather than sign language. Cece struggles with self-identifying as deaf, and rejects learning ASL when her mother encourages it. She depicts herself as both lonely and independent, always very much herself. In one of my favorite details, she wears a red two-piece bathing suit and nothing else for pretty much the entire year she's four.

I think El Deafo resonated for the girls, especially Eleanor, because of Bell's depiction of elementary school friendships and their vagaries. There's a lot to talk about here (as there is in Smile) in terms of making friends, and standing up to your friends when they treat you in a way that makes you uncomfortable, by focusing on your differences. Eleanor's research into the life of Helen Keller (which led us to another terrific graphic novel) also whetted her interest in the subject of deafness.

Isabel loves to read graphic novels on her own, but I think she had trouble making sense of this one without adult help. She picked it up and put it down, fully getting into it only when we sat down to read it aloud together. Recently, it has come into the rotation of books she reads in bed on weekend nights -- the highest accolade.

Have a wonderful holiday, and give my love to your amazing family, all home together for Christmas!