Happy New Year! I'm glad to hear the holiday season at Child's Play wrapped up well for you. Vacation and travel over the last two weeks gave us lots of good reading time, both together and separately -- Eleanor made the case for being allowed to stay up reading in bed with a flashlight on non-school nights. It's interesting seeing the way she reads independently: after we picked up five new books at the library this week, she stayed up and read the first chapter of each, rather than reading any one book start to finish. When one book she's reading gets a little suspenseful, she'll often put it down in favor of another, then come back to it later. All this switching around doesn't seem to hurt her comprehension.

With Isabel, our foray into graphic novels continues. We've probably read Bone ten times by now, in whole or in part. Isabel requests specific episodes and pages, and sits alone with the book when I'm busy with Will, poring over the illustrations. We have the next three volumes on hold at the library.

In the meantime, we've discovered another excellent graphic novel, recommended by our good friend and frequent guest blogger Holly: Zita the Spacegirl, by Ben Hatke. I bought it sight unseen for Isabel, and it's turned out to be a massive hit. (Happily, there are two sequels.)

Zita begins as an Earth girl, running through a field teasing her friend Joseph. They come across a crater made by a meteoroid, and poking out of the meteoroid, a device with a big red button. Against Joseph's fearful objections, Zita presses the button. A portal opens,and metallic tentacles shoot out to capture Joseph, then retreat as the portal closes again. Zita is left, shocked and guilty, on the grass. After gathering herself, she presses the button again, choosing to go into this other world to rescue Joseph.

The other world turns out to be a planet populated by all kinds of alien creatures, large and small. The button (a jumpgate between worlds) is accidentally broken, and Joseph disappears in a spaceship with the tentacled thing, leaving Zita to gather a band of misfits to go after him. Oh, and there's an asteroid on track to destroy the planet in three days.

It's a Wizard of Oz-like journey, a ragtag bunch led by a girl who's landed unexpectedly far from home, and longs to return. There's a giant mouse who communicates by way of a printer hanging around his neck; a not-quite-trustworthy man called Piper who can make and fix all kinds of fabulous devices, and plays a magical pipe to boot; a fierce red orb-shaped robot named One, who doesn't work well with others; a nervous, rattling robot named Randy; a giant alien (not smart, but helpful) named Strong-Strong. Together, they confront the Scriptorians, a group of aliens who believe that Joseph has the power to save them from the asteroid. There's suspense here, danger, some betrayal, but nothing too scary for my brave 4-year-old.

Zita is an appealing character.  She's adventurous, loyal to her friends, and brave enough to keep trying to find Joseph in the face of overwhelming odds. When given the choice, she doesn't want to hurt anyone in her quest -- she stops One from shooting a couple of times -- but she also puts on a massive pair of boots and stomps a pack of robot spiders into smithereens when they attack her and Mouse. She's also quite human. Her reactions throughout feel realistic, including the guilt and fear over what she's caused to happen to Joseph. I'm happy to have her as a role model in this house.

I think Isabel is drawn to the humor as much as to the adventure, in both Zita and Bone. She's started quoting lines verbatim from both books, and two of her most-requested pages focus on interactions with comparatively minor characters engaged in the humor of total exasperation.

In Bone, she loves this interaction between the two rat-creatures who try to catch Fone Bone for dinner: 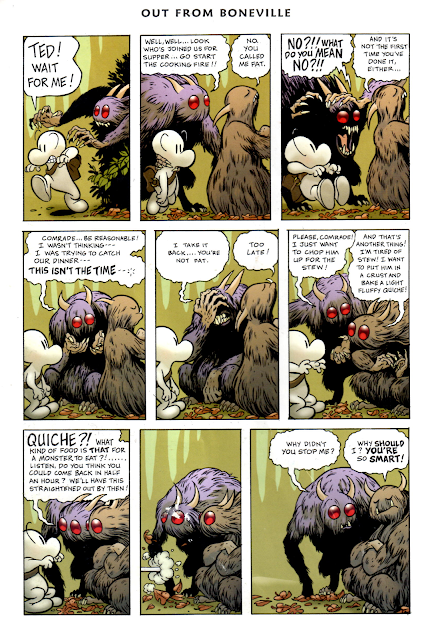 In Zita, it's these two little guys who live inside and maintain a series of pipes, and come out because they hear Zita's tears plinking down and worry that there's a leak: 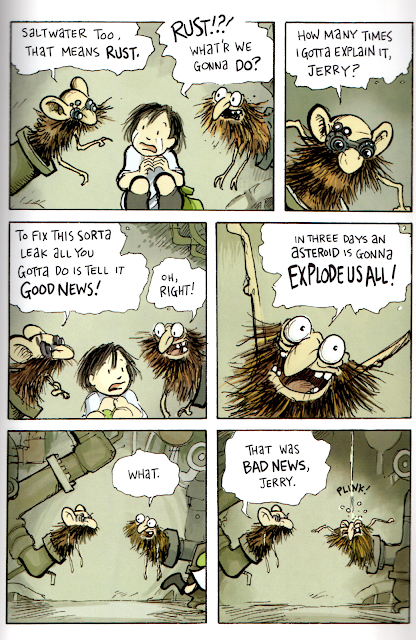 Humor, adventure, monsters and aliens -- we're on a roll here.