Wow.  Two and a half years, 460 posts, and we haven't done two mommies/two daddies books.  We're making up for that now.

I'm quite fond of Mommy, Mama, and Me which you mentioned, and
Daddy, Papa, and Me, also by Leslea Newman.  They're simple, not exceptionally artful, but enthusiastic and aimed at the very young:

The mom version is about lots of stuff to do in a day; the guy version is a bit more play-centric: "Daddy wears a shiny crown./Papa dresses like a clown."

I don't know A Tale of Two Mommies, which you ask about, but Vanita Oelschlager has also done A Tale of Two Daddies, with the same headless parents issue.

For a more contemporary on-the-issues book, Newman has written Donovan's Big Day.  We follow a six-or-so year-old boy as he gets up and gets ready for a big event (puts on a suit all by himself, clips on his new tie).  Grandparents, cousins, aunts and uncles all are there to help, but no parents.  They get to what appears to be a church, say hi to lots of grownups, and Donovan follows his younger cousin down the aisle.  Then his aunt gives him his cue: 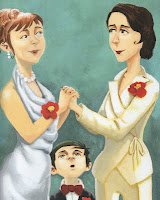 Big hugs and kisses all around at the end.

In comments on your last post, Beth mentions two quite wonderful picture books:

King and King, by Linda de Haan and Stern Nijland (translated from the Dutch), also ends with a marriage.  A prince's mother demands that he find a suitable princess to marry.  He auditions an array of not-very-fascinating women, but one of them brings along her brother, Prince Lee.  The electric look that passes between the princes when they meet lets us know what will happen next.  They fall in love, marry, and live happily ever after.  There's a sequel in which they adopt a child -- it's okay but not up to the standards of this one.

And Tango Makes Three by Justin Richardson and Peter Parnell tells the true story of two Central Park Zoo male penguins who paired up and built a nest together.  Zookeepers gave them an egg to hatch, and they raised Tango, their daughter: The illustrations help to make this a very sweet building-a-family story.   The wikipedia entry on the true story seems to say that all three of them are still living at the Central Park Zoo.  One of the dads has since paired with a female, and when Tango grew up, she found a female partner.

As you point out, it's great to find books that don't scream, This Book is About an Important Issue.  There's one more that I've been told about by a few customers but haven't been able to get for the store.
The Different Dragon by Jennifer Bryan is about a boy with two moms.  The story focuses on one of the moms telling him a bedtime story about a dragon.  The boy and mom create the story together, changing it as they tell it.  The story focuses on the dragon and the process -- the fact of two moms is a given, but not a focus.  Has anybody out there read this one?