This is city life

I'm in New York now, at the annual American Booksellers Association convention.  In a day of many fascinating events, author Lois Lowry (The Giver, Number the Stars, Anastasia Krupnik and many many more) was quite amazing.  She gave a show-stopping speech this morning, and I went to a lovely dinner with her tonight.  Will report all in my next post.

And needless to say it was delightful to see you and your amazing family yesterday -- and to get a chance to play with and read to your girls.

In the meantime, as promised, here are some books about San Francisco, and a little bit of New York too.

From 1959 to the early '70s, Miroslav Sasek, a Czech author and illustrator, created 18 books explaining different place to children.  They've been brought back into print in the 21st century, with a lovely twist to them.  They're all called, This is _____ [city or country name here].

So
This is New York shows pictures of city life -- 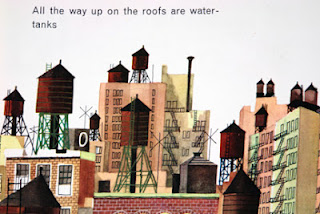 This is San Francisco starts, of course, with hills and cable cars -- 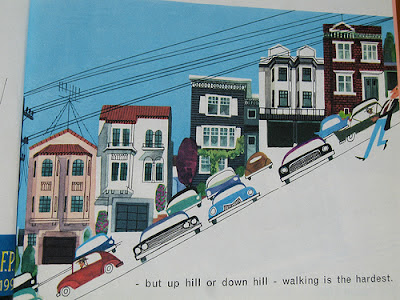 --and goes on to hit the major points of interest -- 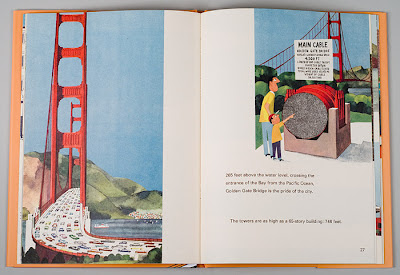 There's lots to look at and anticipate if one is heading to that city.  The whole This is ... series is very gentle and informative.

Virginia Lee Burton, of Mike Mulligan fame, has brought us
Maybelle the Cable Car.  Maybelle and her sisters roll happily up and down the hills of San Francisco -- there's even a two-page explanation of how the cable system works.  "No hill was too steep for Maybelle..."  Then along comes big and smelly gas-powered Big Bill, a bus claiming to be on the side of progress:

I just heard the City Fathers say the cable cars must go...
that you're too old and out of date
much too slow and can't be safe...
and worst of all YOU DON'T MAKE MONEY.
What they want is Speed and Progress
and E-CON-O-MY... and that means US.

The city government tries to eliminate the cable cars, the People rise up and put the decision on the ballot, and behold, they save the cable cars and there's a big party.  Big Bill, who has been humbled by losing control on a steep hill, joins the celebration.

This turns out to be a true story (sans anthropomorphization) -- happened in 1947, five years before Burton wrote the book.  I lived in San Francisco in the '70s and never knew.

And one last true story.
Humphrey the Lost Whale was written by Wendy Tokuda and Richard Hall, both of whom I used to work with in my television days in San Francisco.  It's a lovely, kid-friendly book about a young humpback whale who wandered into San Francisco Bay in 1985, then wandered into the Sacramento River delta and couldn't figure out how to get back to the ocean.  People in boats making lots of noise eventually managed to turn him around.  Happy ending for all.