Our next guest blogger is our frequent contributor Denise, who has written previously about social awareness, the essence of summer, and art. Tonight she writes about a topic near and dear to my heart: trying to read to two kids of different ages at once.


Finding Common Ground between a 2, 5, and 30-something Year Old

Because we don’t have a mechanical dishwasher, every night after dinner, either Sean (almost always) or I (rarely) must do the dishes while the other readies the children for bed and reads to them. Reading to five-year old Jazzy and 2 ½ year old Emerson usually poses a problem. Usually, we read to Jazzy first because she falls asleep earlier; this often results in her disgruntled brother throwing books he doesn’t want us to read at the wall or someone’s head. However, on the occasional night when stars are aligned in our favor, objects are not flung across the room and both children are engaged in the same book.

On the very basic level are books with pictures and simple sight words that the big sister will read to the younger brother (seems to only happen on weekends when she doesn’t fall asleep at the beginning of a book). This is one of the best scenarios for many reasons: Jazzy develops confidence in reading and builds her sight words, her brother who idolizes her listens intently, and Sean and I can just sit back. 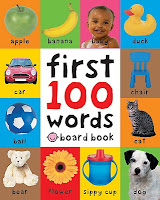 First 100 Words published by Bright Baby. This is a giant padded board book with colorful photographs and font that any myopic like myself can see without glasses. Each page has 9 photographs of a different theme ranging from bedtime to jungle animals. Even though it is probably too easy for many two-year-olds, this is a perfect book for Emerson because he has a speech condition called apraxia. It is very good practice for him to repeat the words shown and to engage with the text in different ways. Sometimes we ask him to point to certain pictures of things or ask him to name the pictures; sometimes we ask him ridiculous questions like, “Is this a dog?” when it is obviously a goldfish – he then laughs, shakes his head vigorously, and says his favorite word while holding the “o” sound.

Brown Bear, Brown Bear, What Do You See? by Bill Martin Jr. and Eric Carle. This book is part of the canon of board books for good reason. There are large, brightly colored Carle-style cut-out prints of animals that span two pages, and the language is repetitive and rhythmic in a calming way: “Brown bear, / brown bear, / what do you see?  I see a red bird / looking at me.” This call-and-response structure gives the book a bluesy feel while teaching the younger one color and animals and the older one practice with a core of sight words.

A is for Animals, an ABC Popup by David Pelham. On each page, two letters in different colors and in upper and lower case; for each letter, a fold-out popup with the painted animal coming out of the page. You don’t  even need 3D lenses to appreciate this. And although the animals are archetypal children's book animals, there are less common ones: Mm Mandrill and Nn Narwhal.

The books that both our children enjoy hearing are:

Charlotte’s Web by E. B. White. There are enough illustrations by Garth Williams to keep both children happy; also, the characters appeal to both of them, and the craft of the writing keeps me amazed. We just finished the chapter “Wilbur’s Boast” in which Wilbur confidently tries to prove to Charlotte that he can spin a web. There is an adorable picture of him with a string tied to his tail as he leaps happily from a manure pile. We all laughed at this part.

Many of the palm-sized board books by Dr. Seuss and others like him are full of silliness. One we have been reading is Ten Apples Up On Top! Emerson often mimics the lion, tiger, and dog putting apples up on their heads then doing stunts like hopping on a telephone wire; instead he puts books or toys on his head and laughs. The kids also like Hand, Hand, Fingers, Thumb which has already been blogged about.
It is exhilarating when both children converge as one and share mutual enjoyment over books, creating a wondrous web where a babbling toddler, an outspoken five-year-old and their picky, literature snob mom are in a delicate balance.