Happily, our stomach bug was not nearly as bad as Ramona's.  I have no new ideas on the stomach flu book front, but in conversation with a colleague today was reminded of two lovely Poppleton stories that have to do with being sick.  In Poppleton, there's "The Pill," in which Fillmore is sick and convinces Poppleton he has to have his pill inside a piece of cake, which results in a tremendous amount of cake being eaten.  In Poppleton Forever, it's "The Cold," in which Poppleton has a bad cold, and his friend, a llama named Cherry Sue, tries to cure him by bringing him a bowl full of oranges.  Each time he peels an orange, he sneezes, and the orange ends up across the room, in some different strange spot.

But moving away from stomachs and colds, and back to trains....

One of your gifts for Isabel in Eleanor's birthday package was the lovely Niccolini's Song,by Chuck Wilcoxen.  We've been reading it three times a day.  It's about a mild-mannered train yard night watchman, Niccolini, who is surprised one night when, after an earlier scare, a steam engine begins to talk to him.  It's worried about the next day, and having trouble falling asleep.  Niccolini sings the engine a lullaby: "a song about gentle hills, steady tailwinds, and feathers for freight."

After this first night, the other engines want Niccolini to sing to them, too.  In Wilcoxen's text, the trains come across very much like children, and Niccolini a tender father:


Niccolini knew that some of the trains were perfectly capable of falling asleep without a lullaby.  In fact, there were nights when certain engines (who felt unloved) would wake themselves up just to have Niccolini sing them back to sleep.  Niccolini didn't mind.  The words came to him easily, the tune was always the same, and it cost him nothing to bring them comfort.
One night, a harried mother walks her sleepless baby down by the train yard; the baby, too, is soothed by Niccolini's song.  The story expands: other mothers come, with other babies, in a quieting parade.  Then one night, there's a terrible wind, and so many sleepless parents and children come to be soothed by Niccolini that no one can hear them.  And so he enlists the engines to whistle his song, while he conducts.

This is a deeply gentle book.  Mark Buehner's illustrations all have the feel of dusky night, every page both detailed and dim, so you have to peer at them closely.  I love the roundedness of his forms: both the trains and Niccolini himself have depth and heft.  Here's Niccolini, early in the book, leaning to listen to the engines: 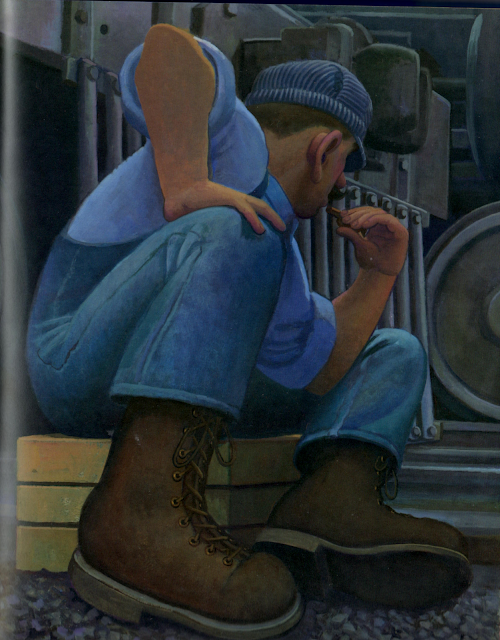 Isabel's favorite illustrations are the ones with mothers and babies, which she likes to identify and comment on: "There's the mother.  There's her baby.  Where's the daddy?  He's home asleep."  For me, though, this is the image that sticks: Niccolini, listening for danger and ready to blow his whistle (look at the tension in his turning form), on the cusp of discovering something miraculous.
Love, Annie
Posted by Annie at 11:10 PM