I love the Tim Noah piece -- I've never thought about sulking, as opposed to other forms of acting out, in literature before.  But reading your discussion of Spinky Sulks (a Steig I don't know, but will certainly look up now), I'm stumped.  You could argue that Grumpy Bird begins as a sulking book -- Grumpy Bird is deep in his own funk for a while -- but he doesn't hole up anywhere, and it doesn't take him too long to snap out of it.  I'd be curious to hear of other books that take on sulking in a serious way.

Pondering the art of the sulk got me thinking about books we have that take on intense emotions, several of which you sent us about a year and a half ago, when Eleanor was deep in age 2 1/2.  One of our favorites is When Sophie Gets Angry -- Really, Really Angry..., by Molly Bang.  Sophie's anger starts with something small: her sister takes a toy gorilla away from her, and their mother confirms that it is the sister's turn.  Sophie trips over a toy truck (hooray for non-gendered toys!), and then she goes off into a full-blown tantrum.

Sophie's anger is outsized.  In Bang's vibrant paintings, her shadow grows huge and orange and smashes the wall; her roar blows toys and books across the room. 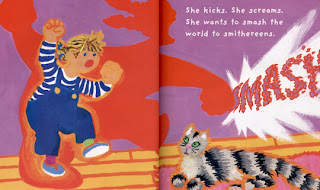 The figures of Sophie and her family members are outlined in colored lines, and as Sophie gets angry, her outline changes from yellow to orange to bright red (her sister's stays green).  Then ("PABAM!") she runs out of the house.  "She runs and runs until she can't run anymore."  Luckily for Sophie, she lives in the middle of a beautiful, safe, forested area, so she runs to her favorite beech tree, climbs it, and cools off by looking at the ocean.  "The wide world comforts her."  She calms down (back to yellow), climbs down, and goes home, aware now of the sounds of the animals around her.  Everyone is glad to see her, and she and her sister and parents do a jigsaw puzzle together.

I like the honesty of the anger in this book, and the way that the rest of the family just lets Sophie deal with her tantrum herself until she's ready to come back to them.  The arc of Sophie's anger rings true.  The book opens up avenues for conversation about the way anger feels: on the copyright page at the end, it asks directly, "What do you do when you get angry?"  Of course, we live in the middle of a city, and running out the door to climb a tree when you're upset is not an option here.  Every time we read the book, I find myself a little wistful about Sophie's family's bucolic life.  So close to the ocean!  And there's dad, sitting on the couch with his seed catalogue....

Sometimes I'm Bombaloo, by Rachel Vail, feels much more like a story of anger and cooling down that might happen in an apartment.  It's another younger-sibling-annoys-the-older-sibling-into-a-tantrum story (here it's a little brother and a block tower that gets knocked down).  The narrator, Katie Honors, describes herself as a generally good kid, but explains that sometimes she loses control of herself: "I'm bombaloo."  Losing your temper, in this formulation, is like being taken over by something wild and uncontrollable -- you become someone else.  I'm of two minds about this formulation.  On the one hand, it makes sense; who hasn't felt this way at times?  On the other hand, it feels a little like a free pass: It wasn't me, Mommy, it was Bombaloo.  I do like that it's humor that brings Katie back to herself and allows her to calm down.

At about the same time you sent us When Sophie and Bombaloo, the New Yorker published Daniel Zalewski's wrap-up of books about children's anger and the ways parents deal with it.  It's pretty damning towards a number of books -- the thesis is that parents have become hyper-aware of the ways they shouldn't discipline their children, and so have become ineffectual at doing so, and that a number of contemporary children's books depict children running roughshod over their parents.  I'd be interested to hear whether, and how much, you agree with Zalewski.  And of course, this opens up the can of worms that is Amy Chua's Tiger Mothering, if we want to go there....