Thanks for the well-wishes!  I'm sure it will be fine -- we'll prep Eleanor for the filling, read some books, and make sure she gets novocaine or the like.  With any luck, she won't have any traumatizing memories later....

Earlier today, I was having a conversation with an art teacher friend of mine about getting through a section of the syllabus jam-packed with Greek and Roman art, which she doesn't find as interesting as Renaissance-and-later work.  She mentioned that part of the difficulty was not being able to keep all the stories straight.  My immediate reaction was to recommend to her the book which taught me everything I could possibly need to know about Greek mythology, a book I pored over for hours at a time in early elementary school:  D'Aulaires' Book of Greek Myths.

It is because of Ingri and Edgar Parin D'Aulaire that I learned the Greek gods and goddesses the way some kids learn dinosaurs: obsessively, insanely, down to every last attribute.  At age seven, I decided to believe in the Greek gods, and whispered prayers to Aphrodite into a little pink shell necklace I wore.  I cast all the members of my family as gods and goddesses of the Greek pantheon: My mom was Demeter, my dad Dionysus, Michael was the baby Hermes, I was of course Aphrodite, Grandpa was Zeus, and Grandma was either Hera (because she was married to Zeus) or Athena (much more like her, really).  Looking back, I think I actually did a pretty good job.

What makes the D'Aulaires's book so incredibly good?  It's a combination of the retelling of the tales -- totally accessible to a wide age-range, but full of the original details, sexy and grisly as they often are -- and the extraordinary drawings.  The drawings are done in colored pencil; some full-color, some black and white, some in a sort of sepia-toned black on brown.  This is how I will forever see the gods on Mount Olympus:

Hera and her henchman Argus with the captive Io: 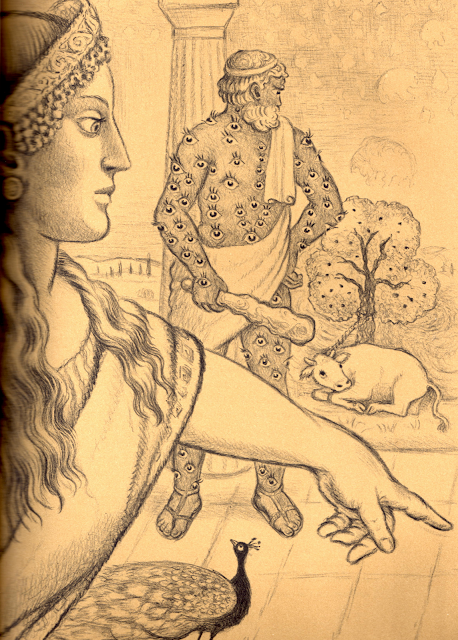 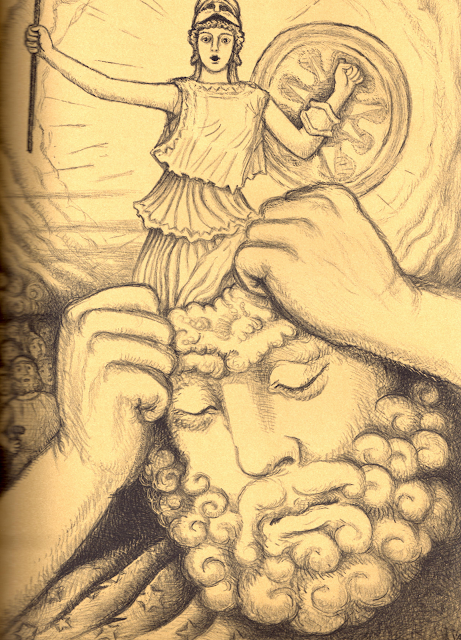 Persephone being pulled down into the underworld by Hades: 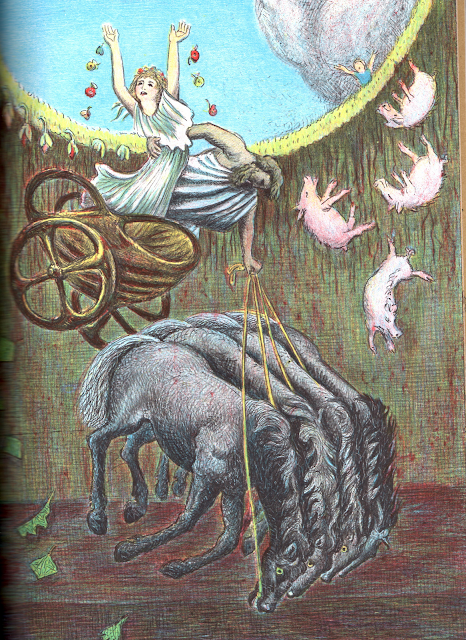 I've read some of the stories with Eleanor, though she's still a little young for the whole book.  The story she's most taken by is Demeter and Persephone, which makes sense: it's the story of the enforced separation of a mother and daughter, a primal and intense idea.  I look forward to seeing what catches her imagination as she gets a little older.