David Wiesner does such amazing books.  After your post of those great Flotsam pictures, I thought I'd add two from Tuesday.  Frogs arise from a pond at 8 p.m. on a Tuesday evening, floating on lily pads, and end up in a town observing the locals and wreaking a little mischief.  As with Flotsam, there's always lots going on in every picture:

He's just released a new one (it's been four years since Flotsam):

Art & Max.  It's much more exuberant than either of the other two books we've been talking about. Arthur is a takes-himself-so-seriously Artist, and his friend Max is an enthusiastic and clueless newbie to painting.  When Max wonders what he should paint, Arthur suggests, "you could paint me."  Max then covers Arthur with paint: 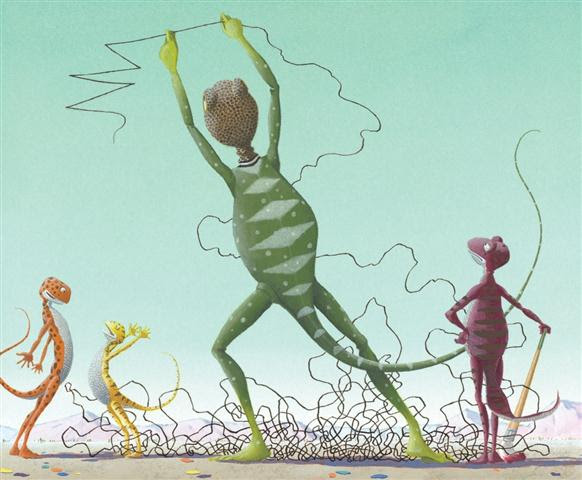 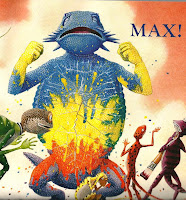 The process of trying to remove the paint reduces Arthur to a line drawing, then he unravels to a scribble.  Max has to rebuild his friend, all the while gaining confidence in his artistic abilities.

It all ends happily, with each character (lizard?) taking on a bit of the creative approach of the other.

I'm curious what your group of three year-olds would think of it.  It seems to me to be both very sophisticated in its approach to the process of making art, yet it also has a straightforward plot, brimming with energy.

The new store opened its doors for business today, despite the fact that we still haven't received shipments from two major publishers.  So we opened without Goodnight Moon, but Harper swears it will be there on Friday.

Deborah
Posted by Deborah at 10:41 PM