Give the people what they want

In my continuing quest to find books with longer narratives that Isabel will tolerate having read to her, I have two more success stories -- or rather, one semi-success story on my terms, and what appears to be one slam-dunk on her terms.

The semi-success (which is also a HUGE success for Eleanor):
Eleanor has been reading another series by my friend and prolific YA and middle grade author Tui Sutherland, whose book The Menagerie was a hit in our house last summer. The series is called Pet Trouble, and each of the eight books follows a different kid in the same town. Each kid owns a dog who causes some kind of trouble: a golden retriever runs away, a beagle howls incredibly loudly, a poodle can't stop getting dirty. 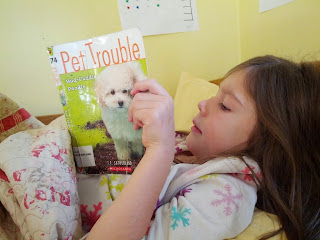 Each book can stand alone as a story, but there are sightings of the dogs and characters from one book in other books, which makes for fun connection-spotting. Eleanor loves the dialogue, and finds the situations hysterically funny. There's a little bit of suspense, but the trouble of the title doesn't get too serious -- they're fun reads.

Isabel has always loved dogs, so I thought that Pet Trouble might work for her as an early chapter book read-aloud. We've been reading Mud-Puddle Poodle together this week (that's the book Eleanor is reading on her own in the picture above), and it's worked pretty well as a mutual read-aloud. The narrator, Rosie Sanchez, is a girly-girl who wants her new poodle to be clean and ladylike, but Buttons turns out to be obsessed with rolling in the mud, and doesn't want to be dressed up in doll clothes.  Rosie's four older brothers are at first dismayed by the cute little dog, but Buttons wins them over by being smart, energetic, cute, and a magnet for the girls who one of the brothers wants to attract. (Side note: as with The Menagerie, I appreciate here that Tui's main characters are a variety of races. Rosie and her family are Latino, which is both clear throughout and not made into a big deal at all.) Isabel loves the descriptions of Buttons's dog-play behavior:

She ran in big circles on the grass in front of us as we walked. The wind blew a leaf past her nose. With a ferocious yip, she pounced on it, then blinked in surprise when it didn't try to run away. She poked it with her little black nose, then looked up at me like, Did I win? Did I win?

Isabel said to me last night, "When you read it, it's like I can see the pictures in my head!" And I thought, yes! This is the revelation I've been hoping for!

But truth be told, even Buttons's antics don't make Isabel clamor to read a book without pictures.  So now we come to...

The slam-dunk (and one of your recommendations to me over Thanksgiving):

Jeff Smith's Bone: Out From Boneville. This is an odd, wonderful series focused on the adventures of three small white bone-people: Fone Bone (the sweet hero), and his cousins Phoney Bone (the schemer who's always getting them into trouble) and Smiley Bone (the dim-witted, cheerful one). In Volume 1, the Bones are kicked out of their hometown of Boneville because of Phoney Bone's antics. They become separated in a desert, and Fone Bone finds himself in a valley populated by huge toothy rat-monsters (visually scary with hairy faces and red eyes, but made somewhat comic through their bickering over how they plan to cook Fone Bone for dinner). There are also kind possums, bugs shaped like leaves, a beautiful, kind human girl named Thorn, and her incredibly tough grandmother, Gran'ma Ben, who raises racing cows. And of course a big red dragon with furry ears who is protecting Fone Bone (no one knows why). I've only read the first book (there are nine, plus a couple of prequels and a connected series), but so far it is weird and wonderful. Rereading your description of Jeff Smith's appearance at the National Book Festival a few years ago, I like him even more.

Why on earth haven't I gotten graphic novels for Isabel earlier? I picked up Out From Boneville earlier today at the library, and gave it to Isabel to look at in the car as we drove up to my parents' place. She was immediately excited: "It has pictures on every page! Oh, thank you, Mommy!" By the time we got to the Upper West Side, she had looked through every page, and was already making up names for the characters. She was thrilled to have Jeff read it to her tonight, and warned him ahead of time that she knew there were going to be a few scary parts. She loves monsters. She loves pictures. She loves humor. We have a winner here.

I hope that business at the store is humming, with Christmas right around the corner, and look forward to hearing from you when you get a chance to breathe!