Sticker Dollys!  Where would I be without them: they sell like crazy.  And they're from Usborne, the lovely British publisher which seems to be successfully resisting Amazon.  The Action Dollys book which you show is a brand-new one.  Some of us think it's in reaction to the Sticker Dressing Heroes which were all male: guys who went into space, disposed of bombs, rescued people underwater, etc.  It got a little irritating that the women were shopping and going to weddings while the guys saved lives, but now the Action Dollys are starting to even it up. 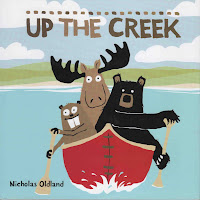 Bob and I are heading to Maine this weekend, and I just ordered a new book for the store that is putting me in the mood.  Up the Creek by Nicholas Oldland is a charming book about one of our favorite summer pastimes: canoeing.


There once were a bear, a moose and a beaver who were the best of friends, though they often disagreed.
One sunny day, the bear, the moose and the beaver decided to go canoeing.

Anyone who has been canoeing with novices -- especially novices who often disagree -- can see where this is going: around. 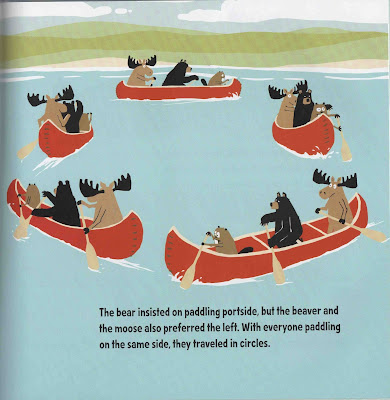 They finally work it out -- this is actually a clever "lesson book" masquerading as a good travel tale --  and fall into something of a rhythm, squabbling enough that they don't hear the approaching rapids.  Just as they plummet into the whitewater, we see the beaver screaming, the moose covering his eyes with his hooves, and the bear, as is his wont, paddling diligently.  Then:


They spend the night stranded on a rock in the rapids, arguing about the best course of action.


The moose wanted to burn the canoe to make a signal fire.
The bear wanted to throw the beaver to shore to get help.
The beaver figured swimming to shore would be safer. . . .

Ultimately, they realize they've just got to get back in the canoe and work together.  The illustrations give a wacky exuberance to this trio, making their arguments and resolutions part of the nuttiness of it all.  There's a two-page spread of running rapids, upending the canoe, capsizing and recovery, a brief shore-side lineup which looks suspiciously like all three guys peeing, and the final triumphant paddles-up joy of flat water.  Exhausted at the end, they cook lunch over the fire: the bear holds a fish over the flames, the moose a handful of grass, and the beaver a branch.

They decide to walk home.

Maybe it's just my proximity to vacation by the Saco River, but it's certainly put me in the mood to get there.  Next week, I'll give you a report on canoeing conditions.

Deborah
Posted by Deborah at 6:46 PM

Email ThisBlogThis!Share to TwitterShare to FacebookShare to Pinterest
Labels: Oldland