Playing in the Park

Eleanor's progress through the early readers is a delight to watch.  She's picking some of the classic authors of the genre: Cynthia Rylant and  Syd Hoff in your previous post, and now James Howe.  Howe is probably best-known for Bunnicula, a chapter book series about a vampire bunny who sucks the juice out of vegetables.  And he's done a more recent series about kids in middle school who are ostracized for different reasons.  He's impressive in a number of different genres. 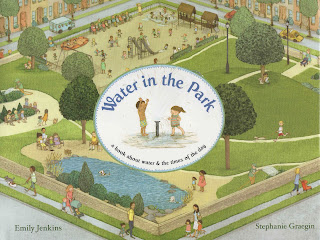 Not unlike our pal Emily Jenkins, author of the wonderful early chapter book Toys Go Out, a handful of picture books including the mathematically-inclined Five Creatures, and, writing as E. Lockhart, YA novels including the excellent The Disreputable History of Frankie Landau-Banks.  She's got a lovely new picture book:
Water in the Park, illustrated by Stephanie Graegin.  Sooner or later, a non-New York-based bookseller can sometimes feel, all roads lead to Brooklyn.  This book was based on a summer's observation of Prospect Park, but the experience is definitely universal.  Going from dawn to dark, Jenkins lists various activities in the park -- most of them having to do with water.


Mr. Fluffynut is scared to go deeper than his doggy ankles.
He holds a tennis ball tight in his mouth and will not give it up.
"Drop it!" says his human.
But Mr. Fluffynut will not drop it.

By 7 a.m. babies arrive, sprinklers are turned on (one baby cries, the other laughs),and soon a panoramic illustration of the playground shows dozens of children in motion.   In late morning, park workers water plants.  Then it's lunchtime:

We'll see more of Claudie in the afternoon.

The grown-ups show up to eat lunches on benches.

Kids dump water on each other and run through sprinklers, someone scrapes a knee, a naked baby runs away from clothing.  When the sprinkler is turned off, the baby who cried when it was turned on now laughs, and the water-loving baby cries.  Dog-walkers and other grownups return, and as it turns to dusk a downpour soaks those who linger.

It's a lovely recitation of the details of life, with many many details to pore over.  I love it for its quiet way of taking everything seriously.  Jenkins' theme of uniting it all with water (pond, sprinklers, bottles, rain) didn't quite work for me.  The human rhythms seem to be the theme of the book.  The detail that's missing here is the drumbeat of cell phones: I can't find even one in the entire day.  Idyllic.

Deborah
Posted by Deborah at 7:41 PM