Soon, I'll do an entry on Mrs. Piggle-Wiggle, possibly one of the Ur-texts of Eleanor's "lesson book" genre.  And riotously funny.  I want to spend a little time and do it justice.

The other week, Lizzie and I were in a doctor's waiting room (her injured knee mercifully turned out to be only bruised) and I dug around in my bag for something to read.  Out popped the delightful
A Near Thing for Captain Najork.  Russell Hoban, of the Frances books and many others, wrote it and Quentin Blake, illustrator of Roald Dahl, did the amazing illustrations.  We read it to each other (quietly) as we waited.  It has definitely withstood the test of time.

A Near Thing is the sequel to How Tom Beat Captain Najork and His Hired Sportsmen.  That one is, alas, currently out of print, so my precis here is relying on long-ago reading.  Tom lives with his Aunt Fidget Wonkham-Strong who disapproves mightily of Tom's tendency to fool around.  So she hires Captain Najork and his four trained sportsmen to knock some sense into him.  They challenge him to games of womble, muck and sneedball, which turn out to resemble what Tom does when he's fooling around -- mucking around in mud is all I can remember of those scenes.  Tom ends up freed of Aunt Fidget Wonkham-Strong's discipline and living with his Aunt Bundlejoy Cosysweet. Captain Najork and the evil aunt marry.

In the second book, A Near Thing for Captain Najork, Tom has fooled around with his chemistry set and invented anti-sticky.  He builds a two-seater frog which runs on the interaction of anti-sticky and jam.


Captain Najork was in the observatory looking through his telescope at the girls' boarding-school across the river when the frog hopped past.
"Follow that frog!" he shouted to his hired sportsmen as he leapt into his pedal-powered snake, and away they undulated.  Captain Najork had not forgotten the time when Tom had beaten him and his hired sportsmen at womble, muck, and sneedball.  "I'd like to try some new games on him," said the Captain.  "I'd like to see how good he is at thud, crunch, and Tom-on-the-bottom."

(How many books will give you an undulating robot snake?)  It turns out Captain Najork has been peeping at the girls' boarding-school's Headmistress while she pumps iron.  Aunt Fidget Wonkham-Strong Najork discovers this, swims the river in snorkel and flippers, and challenges the confused headmistress to an arm-wrestle for the Captain -- "Best out of three," she says.  Meanwhile, the frog is running out of jam, so Tom and the Good Aunt stop at the boarding-school to ask for more, leading the school's commissionaire (read: doorman) to say one of the book's great lines: "There is a lady at the door who wants a pot of jam and there is a snake at the window, madam," he says to the arm-wrestling Headmistress.

There's some chaos; the Najorks work out their differences and go home, followed by the Headmistress who, having seen the Captain, wants to continue the competition for him: 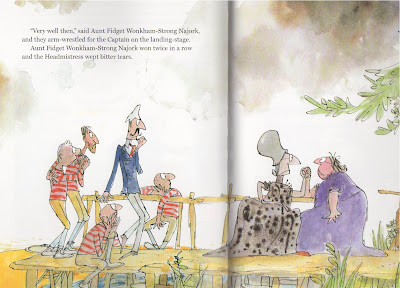 I love the Captain's expression in this one.  The whole story is wacky and delightful.  No lesson to be learned here, but much fun to be had.