There's a chill in the air here: the first frost is predicted for tonight.  And who better to get us thinking about winter than the Moomintrolls?   I'm startled that they've never made an appearance in Annie and Aunt.  Another day I'll write more about their odd and delightful personalities, their chapter books, comic books, cartoons, and intense following around the world, especially in Russia and Japan.  Tove Jansson, a Swedish author living in Finland, created them in 1945, and kept cranking out books until the '70s.  They focus on a family of, well, Moomintrolls and a variety of their friends.  It all feels slightly Winnie-the-Pooh -ish, in a Finnish sort of way.

Today I'm sticking with Moomin's Winter Follies, a comic book first published in 1955. Moomintroll, the son and main character in the Moomin family, wakes to discover "Glass all over our pond." It doesn't stop him from attempting his morning swim: 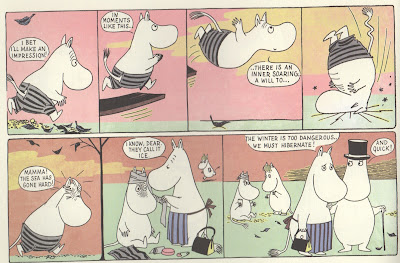 (Moominmama is never without her purse; Moominpapa's top hat is his identifying object. ) 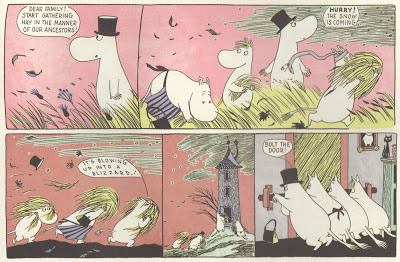 The attempt at hibernating lasts only a few pages: when they leave the house, they discover snow everywhere and the energetic newcomer Mr. Brisk organizing Winter Games.  Skating, skiing, snowball fights -- the charmingly zaftig Moomins aren't the competitive sports types.  Two female characters develop crushes on the oblivious Mr. Brisk, much to Moomintroll's dismay.  All works out in the end, of course.

Then there's the lovely small
Twelve Kinds of Ice by Ellen Bryan Obed, with illustrations by Barbara McClintock.  Obed remembers the many kinds of ice she and her siblings observed over the course of Maine winters.  First Ice "came on the sheep pails in the barn -- a skim of ice so thin that it broke when we touched it."  The fourth kind of ice, Field Ice, is frozen puddles in the fields big enough for the first skating of the season.

The family devotes a 100-by-50 foot space to an outdoor rink, clearing weeds and stubble and putting up framing boards.


When the snow came, we began making garden ice.  The first step was snow packing.  Everyone worked on this -- Dad and Mom, my brothers, my sister and I.  We stamped and packed the snow hard with our boots and shovels.  We packed it with our skis.  We packed it with the toboggan, on which one or two of us sat to be pulled back and forth across the hardening surface.
Suddenly, Dad would say, "Time to get the hose!"

The rink becomes a neighborhood center, with hockey games and figure skaters.  In February there's  an ice show, attended by fans from near and far.

The show is the climax of the season, and the thaw isn't far behind.  There's Last Ice, and then -- until the late fall -- Dream Ice:


This ice came in our sleep.  We never knew when it would come, but when it did, we could skate anywhere we wanted -- down roads, in and out of yards, and over the tops of trees.  We could do any jump we pleased without practicing.  Double axels over houses and splits over telephone wires.  We did spins on chimney tops and spirals down slanting roofs.  We lifted off our skates into the sky to land on the back edges of clouds.

I hope all this ice has been a little respite from the news.  Here's hoping for a good day tomorrow.

Deborah
Posted by Deborah at 10:46 PM