Yesterday was Mona's 21st birthday.  She had asked for her sister for her birthday, so we flew Lizzie from Boston to San Francisco to celebrate with her.  They're used to birthdays together -- 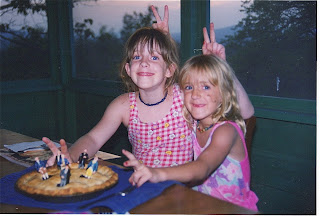 this was Mona's 7th birthday (Lizzie was 8).

I'm breaking from the current discussion to celebrate sisterhood in children's literature.  We've done a lot of that, so a lot of these are links.

David McPhail's Sisters celebrates the positives and negatives with a list:

One liked to wear two different colored socks.
One didn't like to wear socks (or shoes) at all.
One liked baseball.
The other found it boring.
[and on the other hand...]
Both sisters like to help bake cookies
and to play in puddles.
And a pile of leaves was never safe with those sisters around.

In Sheila Rae, the Brave by Kevin Henkes, the big sister is fearless: 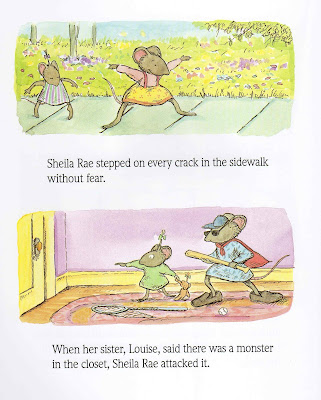 But when she calls Louise a scaredy-cat and sets out on a new route home, Sheila Rae becomes hopelessly lost.  Louise has been secretly following her and pops up in time to lead Sheila Rae home.

When they reached their own yard and the gate was closed behind them, Sheila Rae said, "Louise, your are brave.  You are fearless."
"We both are," said Louise.
And they walked backwards into the house with their eyes closed.

Big Sister and Little Sister, by Charlotte Zolotow features a little sister who finally has had it with being told what to do, so she hides in tall grass in a meadow.  The big sister searches fruitlessly for her, and ends up so worried that she sits down and cries, prompting the little sister to reveal herself and take care of her big sister for the first time.

And where would any sister stories be without Frances and Gloria, Rose and May-May (of the Golly Sisters -- two of children's literature's best sibling bickerers), and Ramona and Beezus (link is to a particularly sister-ish excerpt).

I love the fun, the rivalry, the resentment, the admiration and love that permeate these sister stories.  What am I leaving out?

We could go on to older fare -- The Hunger Games at one end of the spectrum, or Jane Austen at the other.  But that's another day.

Happy Birthday to you Mona!

And love to you, Annie.

Deborah
Posted by Deborah at 10:40 PM