Denise, your pal, occasional guest blogger, and mother of a soon-to-be 2 year-old boy, raised this question after your most recent post:


As I have been thinking of books to get Emerson, I have been noticing that he gravitates toward Superman and popular cartoon books that involve action, fighting, and lots of loud glossy pages, books I do not enjoy reading. He likes Star Wars, the Incredibles, all those Nickelodean characters..
I would love recommendations for my lil' boy who loves to pretend fight, play with balls, and turn anything into a bat.

I'm sticking to the superhero part of this question today, starting with
SuperHero ABC, by Bob McLeod, whose day job is being a comic book artist.  It's your basic ABC book, but each letter is a superhero, starting with "Astro-Man is Always Alert for An Alien Attack.  He Avoids Asteroids!  He has Asthma!"

Here are a few more:

Parents come to the store frequently looking for books about superheroes or Star Wars characters that they can read to their very young children.  The demand is usually there because the kids are aware of the characters, but don't really know who they are.  The parents don't want serious violence and they don't want to show their kids the contemporary movies on these characters.   Three very basic biographies of Batman, Superman and Wonder Woman by Ralph Cosentino hit the spot on this request. 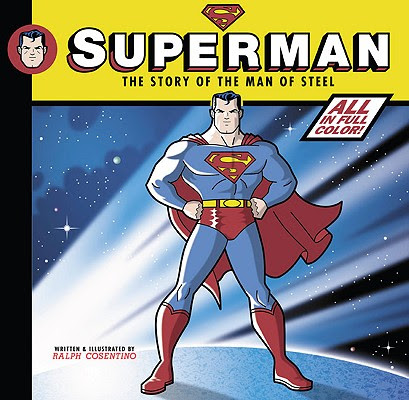 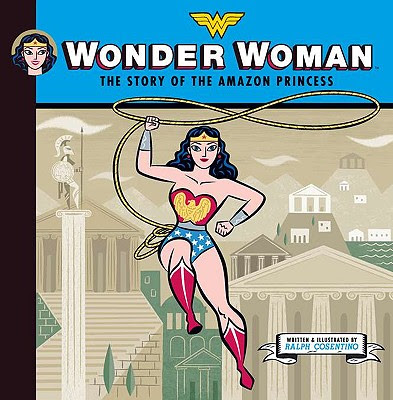 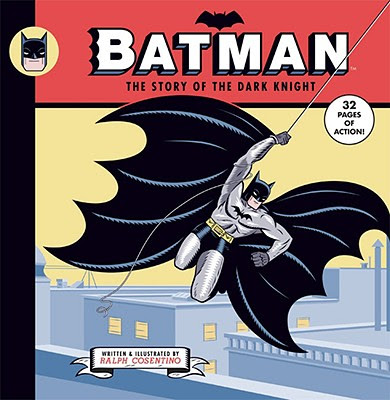 They give enough background information about the characters that other books -- and playground scenarios -- will make more sense.  Definitely worth a parental read-through before introducing them, though.  The basic stories have a certain amount of destruction and demise of parents.  They're in comic book format in small-ish hardcover books and sell incredibly well at the store.

Our friend Bumblebee Boy, last seen negotiating pretend play roles with Ladybug Girl, now has spun off a book of his own:
The Amazing Adventures of Bumblebee Boy, by David Soman and Jacky Davis.  Ladybug Girl isn't here, but Bumblebee Boy (aka Sam)'s kid brother Owen is constantly trying to enter Sam's adventures.

While Bumblebee Boy clashes with evil pirates, fights a fire dragon, stops a runaway lion, and has various other adventures, the pajama-clad Owen keeps intervening.


"No, Owen!  I am playing Bumblebee Boy," says Sam.  You can't be in this game."
"Why?" asks Owen.
This is a bit of a problem.  Sam knows that he is not supposed to be mean to Owen, but he feels like playing his own game right now.
Sam must think fast.
"Because," says Sam, "you are not a superhero like me, see?"
Sam dashes off.

Eventually, Bumblebee Boy decides that fighting aliens on the moon is too much for him to do alone, and he and Owen negotiate a deal in which Owen brings along some bank robber monsters to the moon.  It has echoes of Even Firefighters Hug Their Moms in its pretend play elements, but lots of good swashbuckling too.


Hi!  I'm a superhero [says the guy flying through an urban landscape in a Superman-style cape-and-tights outfit].  My name is Awesome Man.
I have a cape as red as a rocket,
a mask as black as midnight,
and a stylin' letter A on my chest.
I'm just basically awesome.

He does awesome, totally super-hero-ish stuff -- 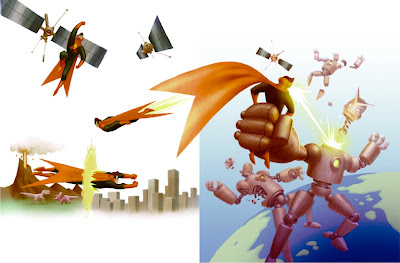 -- sometimes with his Awesome Dog Moskowitz.  He stops trains, vanquishes Professor Von Evil in his Antimatter Slimebot, and gives the Flaming Eyeball his comeuppance.  Sometimes he gets a little too wired and starts hitting buildings and throwing trucks around.  "I might hurt somebody, or destroy a city or something."  So he calms down in the Fortress of Awesome and has something to eat.  By the end of the book he's revealed his secret identity -- a slightly airbrushed-looking kid -- and like the firefighter of yore, hugs his mom.

So Denise, these are all definitely action-packed books, but they have more humor, style, and even good writing than the stuff that gets generated by the licensed-product machinery.  I hope there's something here that makes both you and Emerson happy.

Deborah
Posted by Deborah at 11:47 PM