Your post about statues made me think immediately of the Secret Garden statue in Central Park's gorgeous Conservatory Garden.  It's a fine example of a statue which romanticizes its subject almost beyond recognition: yes, there's a boy playing a little flute who could certainly be Dickon, but is that sylph-like creature holding the birdbath really supposed to be sour-faced Mary Lennox? 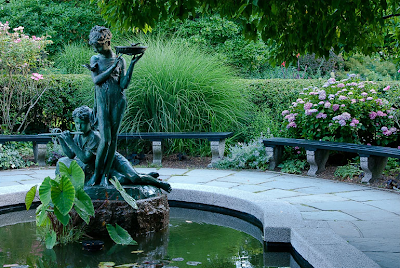 Here, I think, is a far better depiction of Mary, at least as she first appears in the book.  She's a thoroughly unpleasant heroine at this point, a spoiled little rich girl who grew up in India with parents who didn't care about her at all.  When these parents die (Burnett loves her orphans), Mary is sent to live with her distant, rich uncle in his estate on the English moors.  The fresh air and proximity to growing things make her nicer and healthier (she talks a lot about how happy she is she's getting "fatter"; another way in which the statue gets it wrong).  And of course she discovers secrets: the secret garden of the title, which has been shut and locked since the uncle's young wife's untimely death ten years before; the secrets of the moor, as shown to her by the pure-souled, Yorkshire-voiced Dickon; the secret invalid, Colin, who turns out to be her cousin.

As you saw in Maine, Eleanor and I have recently been reading a gorgeous version of Frances Hodgson Burnett's The Secret Garden, illustrated by Inga Moore, whose Wind in the Willows we fell in love with last summer.  Her illustrations are just as good here.  Moore has a feel for the English countryside, and you can tell she's thrilled to be able to capture the specific varieties of plants and flowers Burnett mentions. 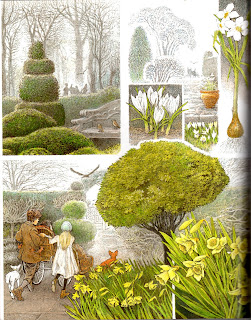 I'll admit, though, it's Moore's animals that get me.  Sprinkled throughout the pages are mice, squirrels, badgers and other creatures, many mentioned in the text, but some just populating the book as they would a garden.  And sometimes, Moore depicts human actions described in the text via the animals.  Here are two of Dickon's squirrels on the page where Mary examines Colin's back to prove to him that he's not developing a hump: 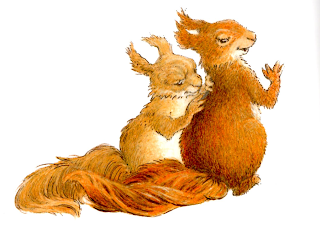 Burnett depicts imaginative play among children as life-giving, even holy.  In  A Little Princess (which we've also written about here and here) and The Secret Garden, she uses the term "Magic" (her capital letter) to describe Sara Crewe's vivid stories and Mary, Dickon, and Colin's belief in the life-force that makes plants and children grow healthy.  It can feel a little heavy-handed at times, but when you give yourself over to the world of the book, it really is quite beautiful.