Hmm, well, birds and bees and four year-olds. One of the many challenges of parenthood. I remember Lizzie asking, when she was about three years old, "How did I come to be?" It was such great phrasing. I talked about Mommy and Daddy loving each other and deciding to have a baby. We got into more of the nitty-gritty later.

I'll come back to this question -- probably in my next post -- after I go comb through my shelves in the store and find the good books.

I thought I'd spend most of this post on the amazing Shirley Hughes and her Alfie books, which Rachel mentioned in a comment last week.   I seem to have mentioned her only once, in relation to Angel Mae, a great Christmas book that's part of her Trotter Street series, now out of print.  She's a British author and illustrator.  The children in her books seem very multi-culturally British, fresh-faced and sweet.  The stories take the daily tribulations of pre-schoolers' lives very seriously, and they tend to have children who behave well, with courage, without being preachy.  There's always a sense of having succeeded at something.  They're lovely.

Rachel, the British versions of the Alfie books are currently in distribution in the U.S. -- I carry them at Child's Play.  You just need to find the right independent book store which carries them.

My favorite Alfie books are: Alfie's Feet (about getting new boots and figuring out which feet to put them on), An Evening At Alfie's (about a ceiling leak when the babysitter is there), Alfie Gets in First (Alfie unintentionally locks his mother out of the house), and
Alfie Gives a Hand.  In this one, Alfie goes by himself (for the first time) to a birthday party.  He's apprehensive, and brings along "his old bit of blanket" to feel more secure.  He politely declines the hostess's  invitation to put it down.  Bernard, the birthday boy, does some major acting out -- throwing Alfie's gift in the air, being wild with his food, playing games while wearing his scary mask -- disconcerting Alfie, but scaring his friend Min.  When it's time to play ring-around-the-rosy, Min won't join unless she can hold onto Alfie, but Alfie can't hold Bernard's and Min's hands and his blanket too. 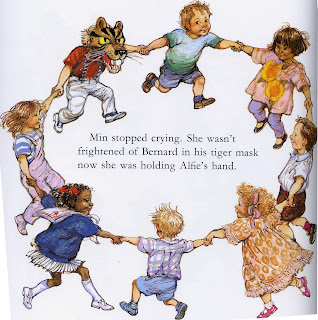 Then Alfie made a brave decision.  He ran and put down his blanket, very carefully, in a safe place underneath the table.  Now he could hold Mind's hand, too, as well as Bernard's.

Alfie is center top in the picture.

The party ends happily and Alfie's mum and baby sister come to collect him as promised.

All the Alfie books are full of detailed illustrations which one can linger over.  Most of them also feature Alfie's toddler baby sister Annie Rose, a pre-verbal forceful personality.  They're great.

Best of all the Shirley Hughes books is Dogger, which I'll save for another post.

Deborah
Posted by Deborah at 10:23 PM