I'm looking forward to the entry you promise on puberty and periods, perhaps more than the advent of those things themselves.  Happily, we still have a number of years to go.

This afternoon, I found myself talking to the girls about Shakespeare.  Jeff and I are headed tomorrow to a matinee of The Taming of the Shrew while my parents babysit, and when Eleanor asked why they couldn't come with us, I had to explain that we were going to "a grown-up play."

This is a funny way to refer to Shrew, a play I teach regularly to my 9th graders because of its mix of high and low-brow humor, its slapstick comedy and dirty wordplay, and elements of romance, fighting, and disguise which wouldn't be out of place in a children's theater.  What is the right age to introduce kids to Shakespeare?

Eleanor was recently given a children's book retelling of, of all things, The Winter's Tale, retold by Bruce Coville and sumptuously illustrated by LeUyen Pham.  It's Shakespeare's story adapted into prose, accessible to younger readers -- Eleanor likes and can follow it with some parsing of the text -- but aimed at a higher-than-picture-book reading level.  Here are the opening paragraphs:

There is a disease that can twist men's hearts and make them mad, and the name of that disease is jealousy.

This was the sickness that came upon Leontes, King of Sicilia, in what should have been the time of his greatest happiness.  He had a lovely and loving wife.  He had a fine young son.  And his greatest friend, King Polixenes of Bohemia, had been in court for an extended visit.


The jealousy started on the day Polixenes wished to return home.  Though Leontes bid him stay, as he had several times before, Polixenes was firm.  "I must return to my own kingdom, my own wife and child," he protested.


"You speak to him," said Leontes to his queen, Hermione.

Of course, Leontes interprets Polixenes' reaction to Hermione as proof that they are having an affair, and banishes her to prison, where she has her baby.  Leontes says the child isn't his, and sends her off to be abandoned in the wild to die.  Their son dies of grief, and word comes that Hermione is dead, too.  Leontes feels terrible!  I wonder why I am reading this book to my 5-year-old!  Then 16 years pass.  The abandoned baby, rescued by shepherds, grows into the lovely Perdita, and falls in love with Prince Florizel, the son of King Polixenes.  Festivals, disguises, and revelations follow, culminating in everyone coming back to Leontes' court and the lovers getting to be together when it's revealed they're both royal.  Everyone is happy, and even Hermione comes back to life (or is revealed to have been alive the whole time).

I've always found The Winter's Tale to be both painfully beautiful in its language and deeply, deeply weird: a problem play, not quite tragedy or comedy.  Reading it as a picture book makes me think of it in a new way -- it possesses the harsh logic of a fairy tale, as we've discussed here and here.  There are terrible losses early on, large gaps in time, magical resurrections.  In some ways, it makes more sense as a kids' book than it does as a book for adults; Eleanor has far less of a problem with the emotional logic involved than I do.

While Isabel isn't able to sit through the lengthy story, she too loves Pham's illustrations, painted in glowing colors and soft draperies.  Lots of expressive hands and faces.  I appreciate the racial diversity in the casting as well: both Paulina, (the awesome servant who's the only one willing to fully stand up to Leontes, and who hides Hermione for 16 years) and her first husband Antigonus are black; no mention of this in the text, just a fact in the pictures. 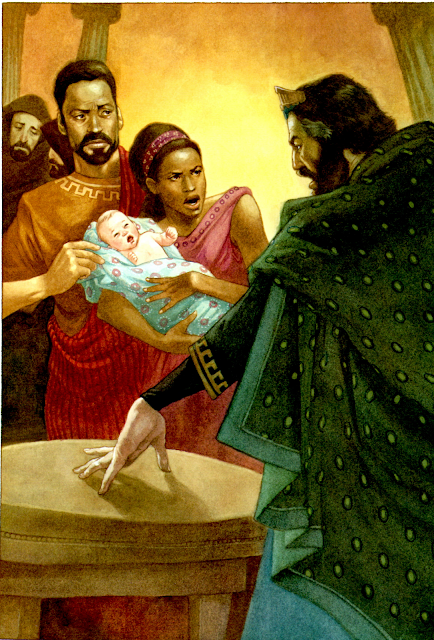 Maybe I should be scouting New York for upcoming productions of The Winter's Tale for Eleanor's next theatrical outing....