We'll have to check out those other intro-to-Shakespeare picture books -- they look terrific.  The other form of illustrated Shakespeare books I have on my shelves are a couple of graphic novel versions I bought during my first year of teaching, at a Massachusetts boarding school where the English Department used them to get high school kids interested in Shakespeare.

Ian Pollock's Illustrated King Lear and Othello, illustrated by Oscar Zarate, each contain the complete, unabridged text of Shakespeare's plays, filled with wild, animated drawings.  Pollock's King Lear leans toward the surreal, with characters of wildly different sizes, and moments when the word is made flesh.  Here, Lear excoriates his daughter Goneril, and appears to pull a bloody lump from himself to illustrate that she is "a disease that's in my flesh, which I must needs call mine": 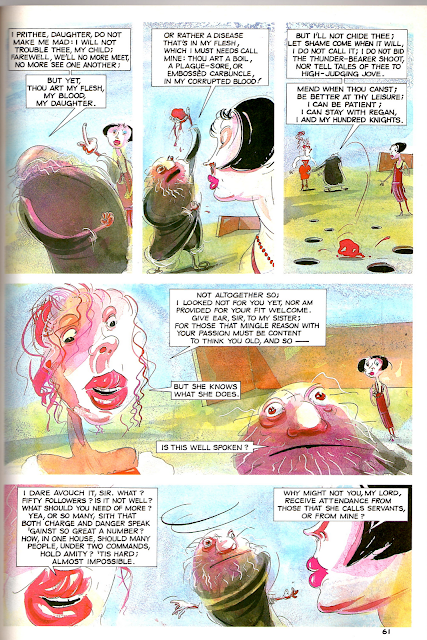 It's engaging and creepy and a little mad, which fits with the plot of the play: Lear's own descent into madness and powerlessness.

Oscar Zarate's illustrations for Othello are more straightforward, though similarly creepy at times.  Lots of play with light and shadow, and the pages become darker as Othello succumbs to Iago's poisonous lies (here, depicted as a physical sword skewering him): 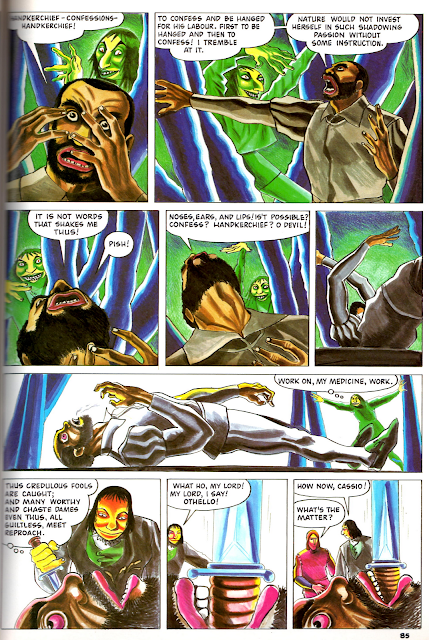 and begins to believe that Desdemona is unfaithful: 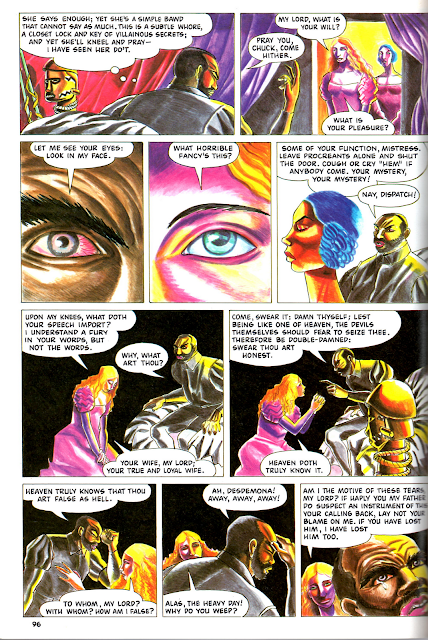 I'll confess here that these are not illustrations which give me pleasure when I return to them.  There's violence here, harshness, ugliness.  All of it is drawn from the text, but it's almost too intense for me at times.  That being said, I can see them hooking YA readers accustomed to graphic novels and manga.  They bring the plays to violent life.