Quirky and out of print

As regular readers know, we're entered in the Independent Book Blogger Awards, and first-round voting ends Monday, April 23.  If you enjoy our blog, please click on the button to the right and vote for us this weekend!


As you mentioned in your last post, we're coming up on our second anniversary here at Annie and Aunt, and every once in a while I too come across a book I can't believe we haven't written about yet.  The most recent one of these for me is a truly strange picture book that was one of my favorites growing up, and has become a favorite with both my girls. 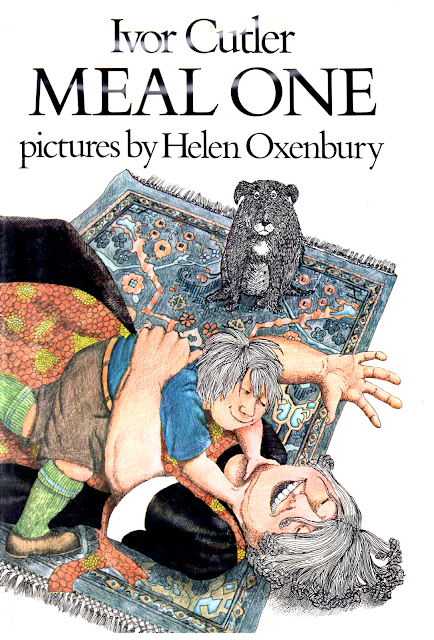 From the cover, you might think that Meal One, by Ivor Cutler, illustrated by Helen Oxenbury, is focused on playful violence between a mother and son.  The title makes no apparent sense, and doesn't seem connected to the picture.  The story goes in a totally different direction from anything on the cover: it's about Helbert, a young boy who is "great pals" with his mother, and the growth of a plum tree inside his house.  It begins:


One morning, Helbert woke with a plum in his mouth.  He pulled it out and held it between his fingers for a good look: it was purple and juicy.

"Who put it in my mouth while I was asleep?" he wondered.

"Me!" shouted his mum, stretching her head out from under the bed with a great grin on her lips.

Helbert eats the plum, and he and his mum decide to plant the plum stone under his bed.  They dig a small hole in the floorboards, and when it doesn't grow immediately, they entreat it:


"O stone!  O mighty plum!  Send forth roots and shoots.  Grow with our love into a plum tree, with lots of plums!" 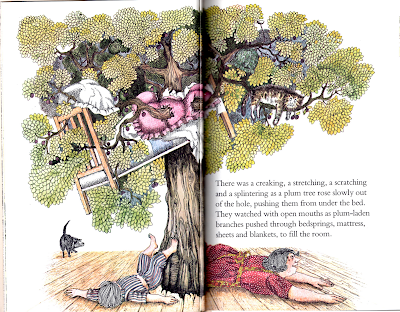 The tree in Helbert's bedroom is fantastic enough, but after he's figured out a way to lie in his bed among the branches and hopped out again, complete with three new scratches, he gets dressed and his mum carries him downstairs for "meal one" -- breakfast.  She kicks open the door to the kitchen and they're greeted by the two pages which engraved themselves in my memory in childhood: 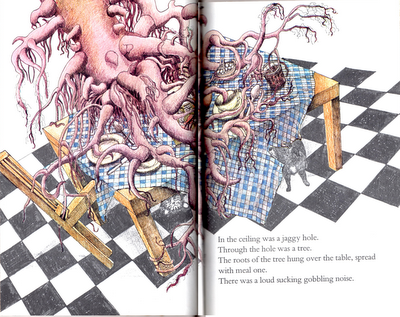 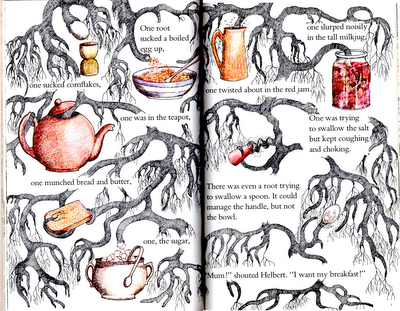 Magical realism continues as Helbert's mum winds time back by turning back the hands of the clock, and all is restored.

That image of the roots eating breakfast fascinated me as a kid.  I can remember staring at it, examining with great interest what each of the roots was doing, and imagining what it would really look and sound like.  The whole book is so playful, so British in sensibility, such a strong combination of realism and twisted magic.  Jeff doesn't understand why I like it quite so much, and I think it has something to do with encountering it as a child rather than an adult.  Which is why, of course, I made sure to get it on our shelves early on.