Thanks for the well-wishes -- after being completely knocked out for two days, I'm feeling much better, and we had a terrific celebratory weekend for Eleanor.  (We got your birthday box tonight, and have only opened part of it -- what a treasure trove!)

Coming off of this stomach bug, and watching family and friends fall prey to it and its cousins in the last couple of weeks, I'm surprised that I can't think of any good stomach flu picture books either.  It's such a common childhood ailment.  Maybe illustrators think it's too gross?  Colds and flus provide picture-friendly runny sore noses, but no one wants to draw their favorite bunny hunched over the toilet or reaching for a bucket over the side of the bed?

The only stomachache books that come to mind are about overeating: stomachache as a punishment for gluttony.  There's Eric Carle's The Very Hungry Caterpillar, who overeats (at a fairground?) on Saturday, has a terrible stomachache, then eats a "nice green leaf" on Sunday (repent, caterpillar!) and feels much better.  Only then does he get to be a butterfly. 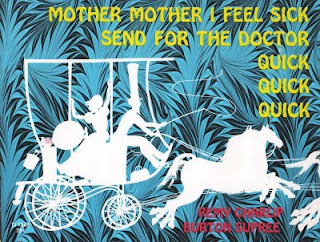 Then there's this wonderful weird old book I had as a kid (out of print now, of course): Mother Mother I Feel Sick Send for the Doctor Quick Quick Quick.
It's the brainchild of Remy Charlip (of Fortunately and Paper Bag Players fame) and Burton Supree, and you can get a sense of its pleasing wackiness from the title.

It's the story of a fat little boy who has a bad stomachache.  His mother races him to the doctor, who throws him under a sheet and begins to pull all kinds of things out of him -- apparently, this boy has eaten everything in the house, from food to furniture to a birdcage with a live bird in it.

The drawings are all done in silhouette, and the book provides instructions for how to act it out as a shadow play, which I remember thinking was a cool idea, though I don't think we ever actually did it.  Vintage Kids' Books My Kid Loves has a nice entry on it, with more of the evocative silhouette drawings.

So again, not really sickness, just compulsive overeating.  But perhaps a book that would make a sick kid feel better anyhow?