The pictures of the Child's Play book section make me wish we were in DC more often.  What a great collection you've set up there!  I look forward to hearing about the expansion.

I'm posting late tonight because I've been up talking with my cousin, your daughter, Lizzie, who's visiting this weekend.  We had a lovely evening, starting out, of course, with reading the girls some of the new books you sent along with Lizzie.  I love the tiny paperback versions of the Robert Munsch books Purple, Green, and Yellow and Something Good.  (These links appear to be to normal-sized versions -- are both sizes available?)

Both books are trademark Munsch from the period where he was developing his storytelling skills with classes of preschoolers: lots of repetition and wild plot devices, pitched at a perfect kids' level.  In Purple, Green, and Yellow, Brigid badgers her mother for increasingly awesome colored markers, until she gets a whole bunch of "super-indelible-never-come-off-till-you're-dead-and-maybe-even-later coloring markers."  Then, of course, she draws all over herself, and when the doctor comes to try to fix her up, she ends up turning invisible.  But that's not the end of the story....  I didn't know Something Good before tonight: the story of a father who takes his kids to the supermarket, where his daughter Tyya complains that he never buys them "something good."  She piles a shopping cart with all kinds of sugar ("three hundred chocolate bars"), and her father gets so frustrated that he tells her to stand still and not move.  This results in Tyya being mistaken for a doll, and having a price tag applied to her nose.  Robert Munsch is awesome -- thank you!

A week ago, we had a reader question from Nelly about finding books with scary pictures: "like wolf (or fox) eating pigs (or seven kids or Red Riding hood or birds in Chicken Little) or being pictured with a fat stomach."  I've been looking through the books we have at home with this in mind, and am not coming up with much, though I feel like these are images I've seen.

In The Helen Oxenbury Nursery Collection, there are a couple of fairly scary illustrations of foxes and wolves going after other animals.  Here's the fox in "The Little Red Hen," bursting in the door to catch the rooster and mouse: 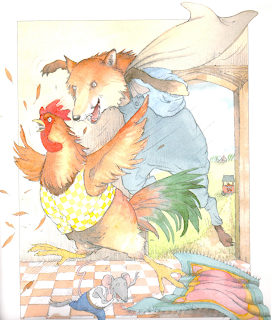 I thought that the wolf in Peter and the Wolf might have a fat belly after eating the duck, but no, not really.  I have a dim memory of a wonderful Harriet Pincus-illustrated Little Red Riding Hood in which the hunter fills the wolf's belly with stones after taking Little Red and her grandmother out, and then sews him back up -- an image both gruesome and domestic.  It's an interesting question: which illustrators give that extra physical detail, and which don't?
Love, Annie
Posted by Annie at 12:21 AM