Happy New Year to you and to all.

I love your daughters' often very personal reactions to the books you read.  Isabel pointing out that she puts on a diaper while the members of the orchestra in The Philharmonic Gets Dressed are struggling into their girdles and garters is so cheering.

I had a lovely discussion of The Philharmonic about two months ago when author Mo Willems dropped in at our store.  He signed a number of books and chatted for a bit.  On his way out he picked up Karla Kuskin's book and effused over it.  He opened it more  or less randomly -- I think this was the page:

"He's so brave," Willems said.  "I wish I had the courage to draw like that."  The reference was to illustrator Marc Simont, but I didn't understand the bravery.  Drawing adults in underwear in a kids' book?  No, not that.  Willems' finger drummed on the woman in the lower left putting on her bra, then on the legs stepping into red underwear on the upper right.  The courageous act was to cut these people's bodies off: to draw just half a person going off the edge of the page. Willems was expressing his admiration as an artist for Simont's originality.  A lovely moment.

Christmas is over, but life remains busy in the book and toy business.  For the last two days, we've closed the store and had it freshly carpeted, and contractors have knocked a ten foot-wide opening in one wall where we're going to expand into a space next door.  The book section won't be moving to the new space, but we will get more room to display what we have.   Carpeting in a store loaded with heavy shelves turns out to be a major adventure.  Everything must go while old ratty carpet gets pulled up and the new stuff goes down.

Here's a photo of the book section from about six months ago, but it looked basically like this yesterday morning: 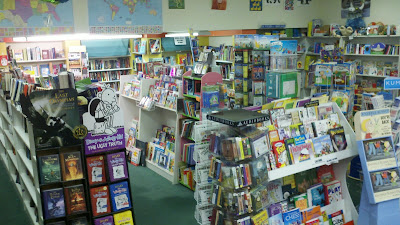 One can't quite appreciate the many imperfections of the green carpeting, but it was definitely ready to go.  An incredibly nice work crew came in, took lots of photos with an iPhone, then started sliding all those shelves to the front of the store.  See that white fixture partly covered by the Wimpy Kid's hand?  Fifteen minutes later, it was almost all that was left, and the guy in the blue shirt is sliding it out of there: 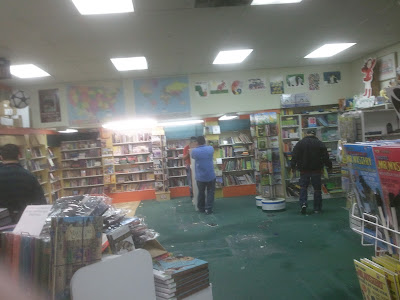 They pulled up the rug, prepped the floor, covered it with thick blue glue, and -- poof! -- by 2 in the afternoon the book section was beautifully carpeted, still empty, and appearing huuuge.  The guys brought all the fixtures back, checking the placement against the iPhone pictures and my somewhat spatially challenged memory (no, I think it was more to the left...).  The store was carpeted in four stages, and the following three stages involved fixtures and lots of stuff being moved into the book section while sections of floor closer to the front of the store were worked on.

Today was spent cleaning shelves, scraping off years' accumulation of scotch tape for signs, and reorganizing a bit. There's more to be done, and I look forward to an island of Star Wars lightsabers and action figures returning to its non-book section home: right now it's parked directly in front of the hardcover picture books.  One of the nice things about this sort of disruption is looking at the space in new ways, and reminding myself of books that have been quietly hiding in corners (and in a few cases, have fallen behind shelves).  Getting re-acquainted with the neighborhood.

I'm looking forward to the expansion, which will probably get in gear a few weeks from now.  Will keep you posted.

Deborah
Posted by Deborah at 11:02 PM