Up from the basement

Bob has gone through a flurry of Fall Cleaning this weekend, digging boxes out of the basement and reorganizing our storage space.  Several boxes marked, "Children's books -- take to Maine" have surfaced, and he hasn't been able to resist pulling some of our favorites to have back on the shelves.  Some of what we've got on display:
and on and on.  I live with lots of these books at work, but it's so cozy having the dog-eared copies here on the bookshelves in the dining room.

The one I grabbed and happily re-read this evening is
The Stories Julian Tells, by Ann Cameron.  The cover has been redesigned kind of unimaginatively, but the internal illustrations by Ann Strugnell are still intricate and lovely.  It's an early chapter book -- one of those starter books in which each chapter is a separate short story.

Julian is an older brother who leans toward magical thinking and making up tall tales.  The first story refers to corporal punishment in a way that one could be unhappy about.  Julian and Huey's father makes a pudding for their mother. "A wonderful pudding....It will taste like a whole raft of lemons.  It will taste like a night on the sea."  The pudding is beautiful, the boys are told to stay away from it, and of course they consume almost all of it when no one else is around.  The last part of the story involves the angry father saying that there's going to be some beating and whipping going on, and the boys are clearly scared he's going to hit them.  The beating and whipping turn out to refer to the steps in making a new pudding, which the dad supervises and the boys make.  They're tired from the exertion, but physically unharmed and no longer hungry for pudding.

I'm making this sound bad, but the relationship between father and sons throughout the book is clearly loving and teasing.  The second story, "Catalog Cats," is one that will stay with many readers for years, if not decades.  Dad sends away for a seed catalog, and the younger Huey asks Julian,


"What's a catalog?"
"A catalog," I said, "is where cats come from.  It's a big book full of pictures of hundreds and hundreds of cats.  And when you open it up, all the cats jump out and start running around."
"I don't believe you," Huey said.
"It's true," I said.
"But why would Dad be sending for that catalog cat book?"
"The cats help with the garden," I said.
"I don't believe you," Huey said.

"It's true," I said.  "You open the catalog, and the cats jump out.  They run outside and work in the garden."

When the much-anticipated catalog finally arrives, Huey bursts into tears because there are no cats.  He explains to their confused father about the cats that will help prepare the soil and plant the seeds.  Again we have the apprehension about parental anger. 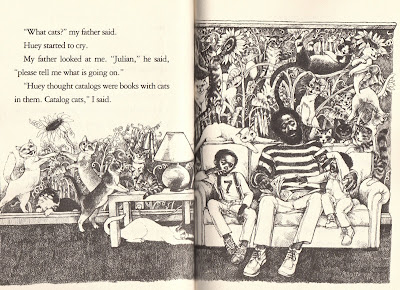 "Julian!" said my father.
"Yes," I said.  When my father's voice gets loud, mine gets so small I can only whisper.
"Julian," my father said, "didn't you tell Huey that catalog cats are invisible?"

The father goes on to weave a much taller tale about the catalog cats, how they move too fast to be seen, and they only work on gardens if people do half the work too.  By the end of the succeeding chapter, Julian half believes in them.

Our girls were quite fond of this one --  it was lovely to revisit tonight.

Deborah
Posted by Deborah at 11:37 PM