Julian sounds like an awesome character.  We'll have to put him on the list.  We've just run through the four linked Edward Eager books that begin with Half Magic, and are back to rereading My Father's Dragon.  The end of The Time Garden, which has the scene in which Katherine and Martha's children travel back in time and meet (and rescue) their mothers as children, was a fabulous reading experience.  As Jeff read the scene and Eleanor realized what was happening, she got incredibly excited, so much so that she started bouncing and jumping on the couch, sputtering, "Everything!  Everything!"  I can't wait for her to discover other linked fictional universes. 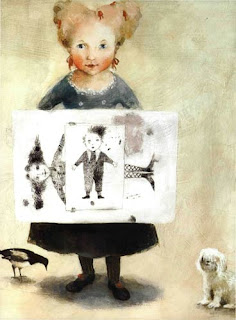 Your descriptions of Julian's tall tales made me think of a picture book which also involves tall tales and strange, elaborate drawings: Waiting for Gregory,by Kimberly Willis Holt, illustrated by Gabi Swiatkowska.  It's a book Aunt Irene and cousin Ona sent Eleanor when I was pregnant with Isabel -- a Preparing for the New Baby book, with a couple of twists.

Aunt Athena is expecting a baby boy.
She says we'll call him Gregory.

The picture is of Iris, the narrator, holding the rendering of Aunt Athena's pregnancy.  It gives you the sense of the lovely, odd combination Swiatkowska achieves in her illustrations: her characters have an 18th-century feel about them, and the pages are filled with intricate line drawings of ladders and angels and strange machines -- it feels a little like an artist's notebook.
Iris is eager for her cousin to be born, and curious about when it's going to happen, but no one will give her a straight answer.  "Soon, Iris, but not too soon," her father tells her.  And then the myths come: Iris's grandfather tells her Gregory will be arriving by stork; her grandmother tells her he's growing under a cabbage in her aunt's garden, her friend Lacey insists it has to do with Aunt Athena eating "a thousand chocolate-chip ice cream sundaes with sour pickles on top."  Finally, Iris asks her mother, who pulls out the most accurate information from each story (while still eliding any actual physical facts of pregnancy), and gives Iris a rough estimate.
Iris goes on in the vein of Babies Can't Eat Kimchee to imagine all the things she wants to do with Gregory: 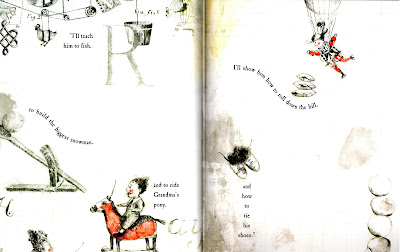 When Gregory arrives, of course, he can't do any of those things yet, but there is the hopeful, pleased sense that some day he will.
Love, Annie
Posted by Annie at 10:31 PM