Press Here gets high marks in our house.  At 4 1/2, Eleanor finds it totally amusing and fun -- really gets into pushing the dots, though she knows of course that it's not real.  Isabel likes getting her hands all over it because that's what Eleanor is doing, but she doesn't seem to get the apparent causal connection, either to think that her pressing on the dots is doing anything, or to realize that it isn't.  My feeling is that it's a book with a very specific perfect age range: say, 3 to 5.

All this talk of self-conscious picture books has made me think of an oldie from my childhood: the Sesame Street classic The Monster at the End of This Book.  I'm glad to see it's still around.  It's a similarly meta-story: Grover sees the title, and spends the whole book talking to the reader about how nervous he is about the monster that's coming.  Of course, you get to the end, and the monster is Grover himself ("Oh, I am so embarrassed.")  There's apparently a new sequel to the book, starring Elmo as well as Grover: Another Monster at the End of This Book.

We don't have a ton of TV tie-in books, but I've found the Sesame Street ones to be pretty decent as the genre goes.  (It's funny -- I don't remember buying any of them, or even receiving them as gifts, but we have several.  They're kind of like mushrooms, growing up naturally in the soil of any house containing kids.) 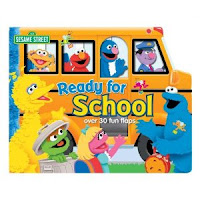 Isabel's favorite is Sesame Street Ready for School, a 10-page lift-the-flap board book that I think we may have found in our building's laundry room.  It's pretty awesome: one double-page spread focuses on shapes in a street scene of kids going to school, one on numbers (counting things in the classroom), one on colors (art class), one on action words (on the playground), and the last on food (snack time).  You can tell this is new, politically correct Sesame Street by the fact that Cookie Monster's cookie-shaped lunch box contains only a fruit cup.  Sigh.

The other favorite Sesame Street book around here is Animal Alphabet.  In it, Elmo and the other Sesame Street regulars walk you through animals whose names begin with every letter, in order.  We have a number of alphabet books, but the cartoony nature of this one (and of course the appearance of Elmo, who is like crack to children) has made it a hit with both girls for quite some time.  The text of these books isn't terribly interesting, but it's always at least decent, and there is an underlying educational philosophy, which is more than I can say for a lot of the TV books out there.