Guest blogger: Matthew Swanson gets excited by stuff in Crabtree

Your family takes awesome vacations. Best of luck to Bob and Lizzie on their Rosemary Sutcliff-inspired trip!

For a while now, I've wanted to have Matthew Swanson write a guest blog. I went to college with Matthew and his wife Robbi Behr, the dynamic duo behind the kids' book and music subscription Bobbledy Books and a host of other projects. We've mentioned their Build Your Own President book, and our guest blogger Faith raved about My Henderson Robot, a favorite in my house as well.

Here's Matthew, with one of his recent favorites:


Oh my gosh, I love this book. 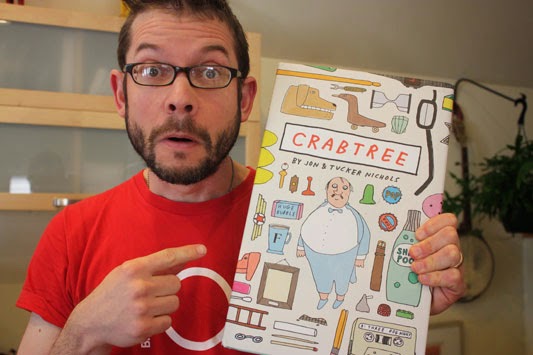 I love it for various reasons.

1) It’s really big. And it has smooth, thick paper. It’s really nice to hold in your hands.

2) It’s about a guy named Crabtree. He’s really funny. He’s downright hapless, which means he’s pretty confused all the time and can’t find what he’s looking for and needs lots of help. Which kind of reminds me of me. The specific thing Crabtree needs help with is finding his false teeth. He decides that the best way to go about finding his missing teeth is to go through every single thing he owns. 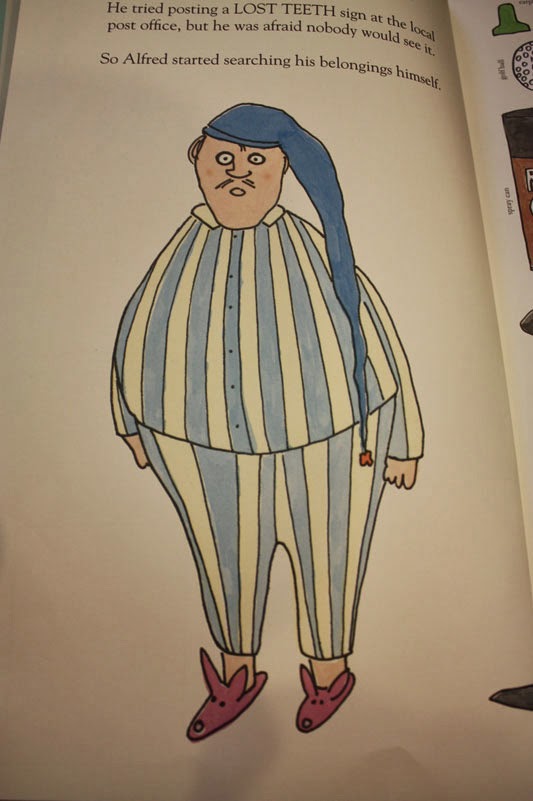 3) Because Crabtree is going through every single thing he owns, every page of the book is full of stuff. All of Crabtree’s stuff. And Crabtree has lots and lots of wonderful stuff. He has hats and helmets, for example. 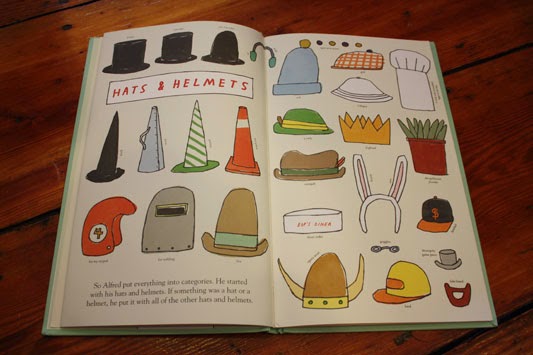 He has real ducks and his fake ducks (otherwise known as decoys). 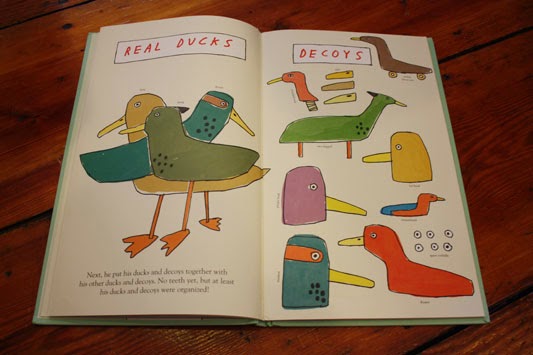 Here are his ants (most of them, anyways). 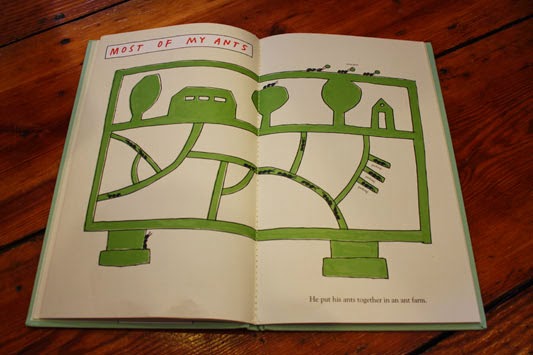 And all the things he owns that are yellow. 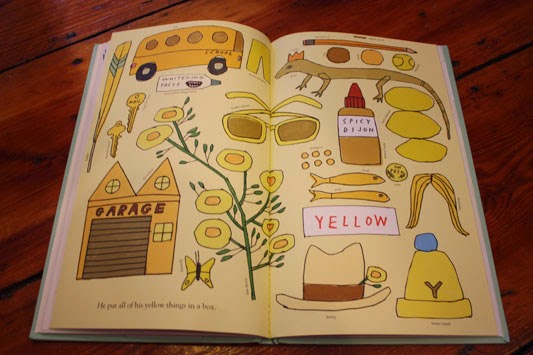 This book is not big on plot, but it's huge on amazing drawings of stuff, stuff weird and unexpected, stuff mundane and sublime. I love the wonky style, the not-quite-perfectly-colored in shapes, and the hilarious captions for each of the drawings.

4) (Perhaps you forgot that we were following a numbering scheme, but here we go again.) This book boasts advanced production techniques, including a double gate fold, which allows for so many drawings of stuff that my head nearly explodes with happiness. 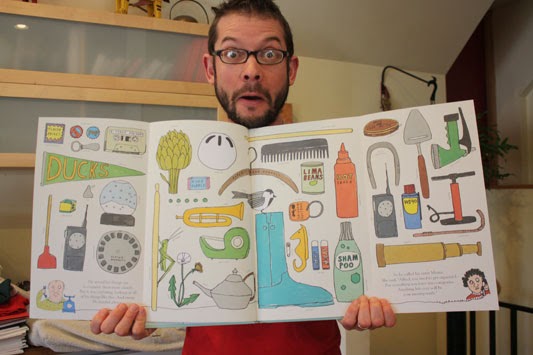 5) Just as my head was literally about to pop off of my neck and fly up to the moon in utter delight, I discovered that the dust jacket is actually a poster! 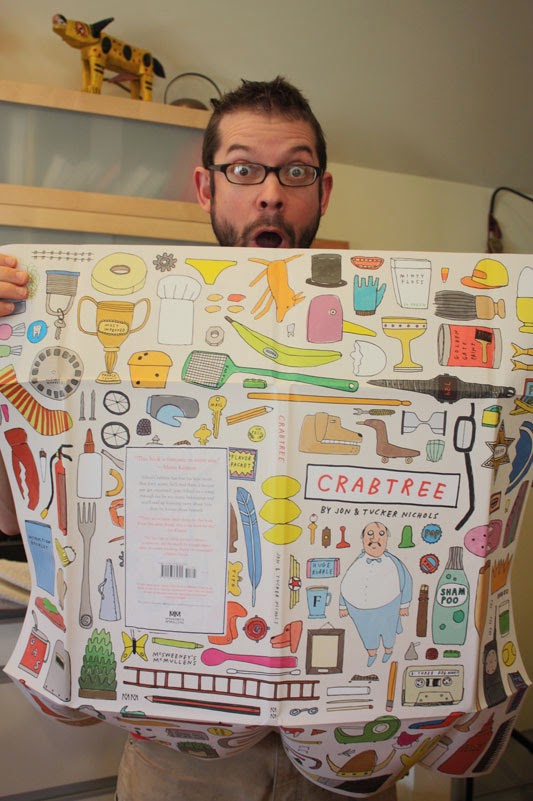 And not just a poster, but a TWO-SIDED poster! 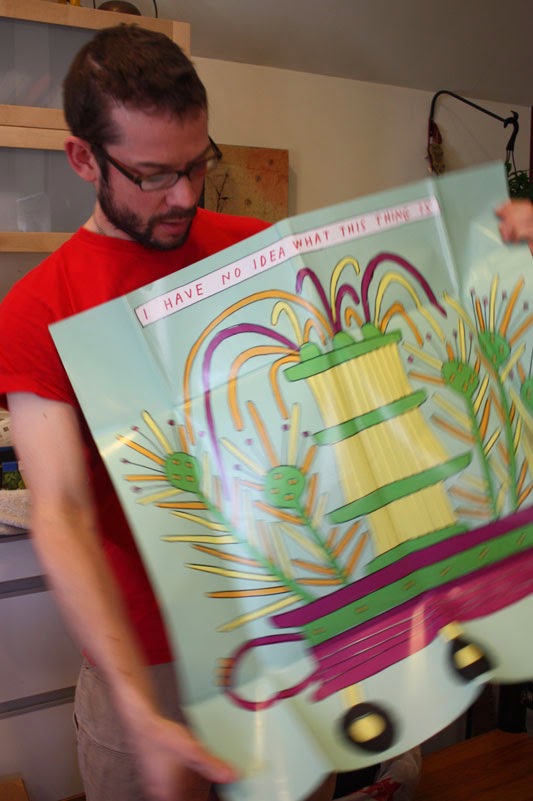 I've read enough about book reviews to know that I'm not supposed to give away the exciting conclusion. But this I will tell you: Crabtree does find his teeth. However, I will not tell you how.

I wish I had written this book, darn it. But since I did not, I'm really glad that Jon and Tucker Nichols did.
The verdict: Two thumbs up. This book is the greatest. I love the art. I love the drawings. I love the humor. And, as already stated, I love the printing techniques and paper.

This is a book that kids will love looking at (I've never met a kid who doesn't love identifying "stuff" on a page; have you?) and adults will not mind looking at over and over and over again (which is the true measure of success for a children's book in my dad-centric opinion).

A father of three, Matthew Swanson is the author/publisher behind Bobbledy Books, a picture books and music club for kids he runs with his wife, the illustrator Robbi Behr. His book Babies Ruin Everything will be published by LB Kids in 2016.