Of course, just after writing about my mixed feelings for Roald Dahl last week, we cracked open one of your birthday presents for Eleanor, a slim, beautifully illustrated picture book with all the adventure and none of the nastiness I've come to expect of him.

One of the things he was NEVER NEVER allowed to do, the most exciting of them all, was to go out through the garden gate all by himself and explore the world beyond.

Of course, the majority of the story involves Little Billy doing exactly that.  Inspired by a voice in his ear that he thinks of as the Devil, he hops out the window and runs off to explore the Forest of Sin, though his mother has warned him of the horrible creatures living there: Whangdoodles, Hornswogglers, Snozzwanglers, Vermicious Knids, and the Terrible Bloodsuckling Toothpluckling Stonechuckling Spittler.  (Okay, I admit that so far it sounds very Dahl-like.)

Once in the forest, Little Billy is chased by a monster he can hear and smell but not quite see -- the puffs of smoke are too great.  He climbs a tree to get away, and finds himself face-to-face with first one, and then hundreds, of Minpins: tiny people who live inside the trees.  The horror of the monster below is forgotten as Little Billy peers into their miniature rooms through postage-stamp sized windows.  The illustrations, by Patrick Benson, are intense and lovely in equal measure. 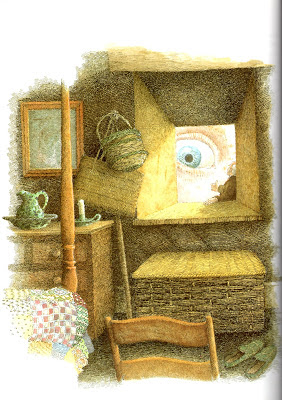 The Minpins are friendly as can be, and show Little Billy how they live, foraging for food and exploring on the backs of all the birds in the forest. 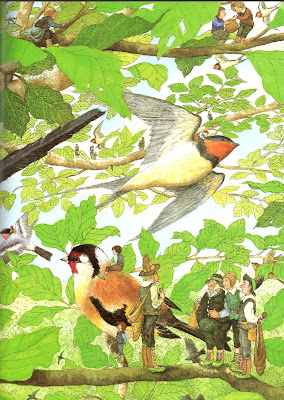 They urge him not to climb back down the tree, as the monster who was chasing him -- the Red-Hot Smoke Belching Gruncher -- is waiting below.  Little Billy learns about the Gruncher from the Minpins, devises a plan to destroy him, and enlists the Minpins' help in doing so.  He's calm in the face of danger, and earns the respect of the Minpins.  Plus, he gets to fly on the back of a very large swan.

The Gruncher is a funny creation: from the beginning to the end of the story, we get only glimpses of him through the smoke.  There's none of the usual Roald Dahl detail -- the Gruncher is a fuzzy nightmare creature, not a specific terror.  What sticks, and what has captured both Eleanor and Isabel's attention, is the wonder of Little Billy's meeting the Minpins.  Little people, as we've written about before (also here and here), are endlessly fascinating, and there's a sense of wonder in Little Billy's ultimate explorations.

That's the way The Minpins ends, with this sense of wonder in Dahl's final words to the reader:

Watch the birds as they fly above your heads and, who knows, you might well spy a tiny creature riding high on the back of a swallow or a raven.  Watch the robin especially because it always flies low, and you might see a nervous young Minpin perched on the feathers having its first flying lesson.  And above all, watch with glittering eyes the whole world around you because the greatest secrets are always hidden in the most unlikely places.

Those who don't believe in magic will never find it.