Back to the little people

Portfolios, those gorgeous, time-consuming projects put together by my junior and senior students, are done.  I've still got some grading to do, it's true, but I'm back to something resembling my normal state of exhaustion, and summer is so close I can smell it.

Before we get too far removed from the thread we were pursuing so happily when end-of-semester grading intervened, I want to bring us back to books about little people.  Specifically, one book: a book whose title was so much a part of my childhood that it sounds completely normal to me, until I step back and look at it and realize its oddity.  It is a title which tells you nothing about the contents of the book, which is hard to parse when you first hear it, and which, if you hadn't fallen in love with it at a young age, would probably be hard to remember.  Oddly, the author is T.H. White, who generally knew a thing or two about titles (see The Sword in the Stone and The Once and Future King).

It was one of my grandfather's (your father's) favorite books, so I have no doubt that you, too, remember him reading passages out loud.  I can remember his excitement about me being ready for him to read it aloud -- I think we may have had a false start or two when I was too young for it -- and his great pleasure in my loving it too.

Mistress Masham's Repose is the story of 10-year-old orphaned Maria (yup, another orphan), an heiress of sorts who lives on her ruined estate under the care of her guardian, the vicar Mr. Hater, and a horribly mean governess, Miss Brown.  Maria lives in general misery save for the friendship of a dotty old professor and a nice cook.  Then, one day, she discovers the city of tiny people living on an island in the corner of the estate, in a run-down temple known as "Mistress Masham's Repose." 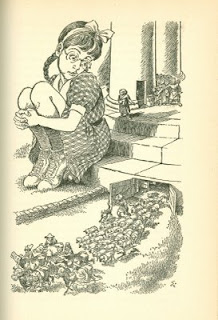 The tiny people turn out to be the descendants of Gulliver's Lilliputians, a community in exile.  Maria tries to befriend them, and there is some comedy in her large bumbling -- I remember particularly a Lilliputian being wrapped up in her handkerchief and very red-faced and angry when he's tumbled out.  They eventually grow to understand and like each other, and Maria and the professor must become the Lilliputians' protectors when Miss Brown and Mr. Hater get wind of their presence, and sense a chance to make money off of them.

I would love to reread this book -- it's been years.  Happily, after being out of print for a while, this is another gem that's been reprinted under the auspices of the New York Review Children's Collection.

Did your kids ever get into this one?