Serious Issues from the 1980s

Among my summer projects was the task of going through a pile of boxes formerly housed in my parents' storage room, which my parents returned to me almost a year ago.  I spent a number of hours digging through them last week, sorting letters and papers, discarding college notebooks, wallowing in memories.  One of the best boxes to open was marked "YA books," and stuffed to the brim with all my old favorites: Madeleine L'Engle, Cynthia Voight, Paula Danziger, Lois Lowry, Judy Blume.  And then there were the smattering of books I'd forgotten, which came rushing back as I picked up the dog-eared paperbacks with their airbrushed 80s covers. 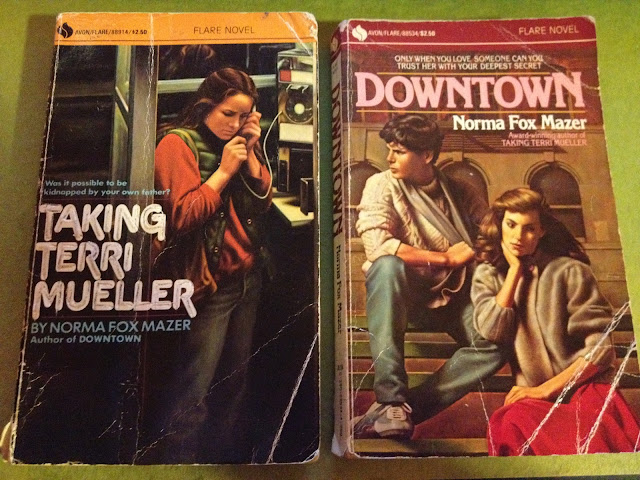 Such shiny hair!  Such serious faces!  These two Norma Fox Mazer paperbacks were in heavy rotation in my junior high school years.  They're both gripping, realistic YA fiction which take their plots from 1980s Serious Issues.  While there are aspects of both that feel a little dated, rereading them again in the last couple of days has reassured me that they hold up well.

Taking Terri Mueller (that's the current cover, to the left) is the story of a 13-year-old girl who has lived alone with her father for as long as she can remember.  Terri and Phil move around a lot -- often more than twice in a year --and Terri knows no other family except for an aunt she sees once a year.  Phil tells her that her mother died in a car accident when she was four, and has no pictures.  As the spoiler tag line on the 80s cover above reveals, Terri figures out more than halfway through the book that her father kidnapped her after losing custody when her parents divorced.  Her mother is alive, and has been desperate to find her since she was taken.

Mazer does a beautiful job of presenting all the nuances of this family situation: Phil is a caring, loving father who it's hard to demonize; you can see his side of things.  At the same time, the pain his kidnapping of Terri has caused for the rest of her family, and for her, is front and center.  Phil gets involved early in the novel with a single mom, Nancy, who is warm and loving, the first woman he's considered settling down with.  After the revelation of the kidnapping, Nancy can't reconcile herself with what Phil has done, or with his lack of remorse about it.  She's a kind of moral center as Terri is so emotionally embroiled that she finds it hard to know what she's feeling.  The book is written in close third-person, mostly Terri's perspective, but at a few moments it shifts to Nancy's, Phil's, and Terri's mother's.  It's even-handed, and at the same time completely emotionally gripping.  Not to mention still, unfortunately, quite timely.

Downtown is narrated by Pete Greenwood, a 16-year-old boy who lives with his uncle Gene, and tells people his parents were killed in an accident.  Unlike Terri, Pete has always known the truth: his parents, Laura and Hal, were members of a radical group that bombed a government research lab eight years earlier.  The bomb unexpectedly killed two people, and Laura and Hal, wanted for murder, went into hiding.  Until age eight, Pete was Pax Connors; since the bombing, he has taken on the burden of a new identity in order to keep his parents safe.  He's seen them three times since then, and keeps a notebook of license plate numbers of cars he thinks might be following him.

The jacket copy, at least on my book, focuses largely on Pete's relationship with Cary, a beautiful girl he meets downtown and begins to date.  She has complications in her life as well: she's been in the foster care system since she was four, and is hoping to be adopted by her latest foster family.  Pete is pleasingly imperfect -- he has an uncontrollable temper at times, and is less than secure about himself.  But again, the characters in this book feel warm and real, even when they're prickly.

I may have trouble tearing myself away from this box to get any school-prep reading done....