I promised to revisit the gay-themed books for kids topic one more time, mostly because I wanted to mention two books which sort of fit, but maybe not quite...

The Boy Who Cried Fabulous is by Leslea Newman, who seems to have written about half the books about gay parents -- starting with Heather has Two Mommies.  She's not one to be coy about a topic, but it's interesting what she's written here:

When Roger started out for school,
his mother set a simple rule.
She said, "Now Roger, you go straight --
straight to class, and don't be late."
. . .

He admires the clothes, the customers, the day, the world.  Everything is "fabulous" (although "simply divine" sneaks in there too).  Roger has such enthusiasm for every distraction that he's constantly late wherever he goes.  His parents (one mom, one dad) are very irritated.  The next day as the family goes to town together, mom and dad ban the use of the word fabulous.  Although he's trying hard, Roger just can't toe the line, but his exuberant descriptions sprout new adjectives: marvelous, wonderful, dazzling, glorious, etc.  The scene becomes crazier and crazier as Roger ends up dancing on tables then leading happy townsfolk in a parade, complete with elephant ride.  A moment of suspense ensues as he turns to see his parents' reaction.

"We've never, ever had such fun,
and you are the world's most fabulous son!"

It's fun, it's a good story, written with panache.  Maybe it's about following your enthusiasms, maybe it's about parents accepting their gay sons.  The differing interpretations feels a bit like The Lion the Witch and the Wardrobe, it's a wonderful magical tale, and some also see it as carrying a Christian message with a clear crucifixion allegory.

Another excellent character bucking his family's expectations is Liam, star of
Piggy Bunny, by Rachel Vail, illustrated by Jeremy Tankard of Grumpy Bird fame.  Liam is a piglet who wants to grow up to be the Easter Bunny: he practices hopping, eats salad and tries to deliver eggs.  His parents point out that he's "a terrific piglet" (nice adjective choice) and they love all his sweet piggy attributes.

Then Liam's grandparents visit and Grandma bucks the family attitude.


"They just have the imagination of a kumquat, the lot of them."  She shook her large head.  "Go put on your Easter Bunny suit, Liam.  Then they'll see."

Turns out he doesn't have one.

Liam's grandpa smiled gently.  "This is the kind of problem" he whispered, "that is called fixable."

They go to the internet to solve the problem.  When it arrives, the suit is itchy and doesn't quite fit right, but when he looks in the mirror,

looking back at him, was Liam, the Easter Bunny. 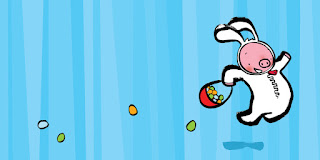 This is an enjoyable book on many levels: it's funny, it's a believe-in-yourself story, and the author (in a very nice discussion with the illustrator) even calls it subversive. One of my co-workers pointed out another interpretation.  Julian, who used to be Nicole, read it through with a huge smile and said, "This is me."  Liam, the transgender piglet.  It's his current staff pick.