I clearly need to bring Isabel
Peek-a Who? by Nina Laden when we see each other in a few weeks. It's a simple board book with a big hole in every other page.  There's a page with a hole and part of the next page visible. Facing that, the text says, "Peek-a." The thought finishes when the page is turned, an owl is revealed, and WHO! is the punchline.  Then there's Peek-a MOO! (Holstein), BOO! (ghost), ZOO! ( lots of animals), etc.  There's something very satisfying about all those holes that you can grab to turn the page.  I found this lovely series of photos of a four month-old reading it on a family blog from Portland Oregon.

Laden went on to do Ready, Set, GO! (blow, throw, row, etc.) with circular holes.  But for Isabel, it'll be  the animal one.

Somehow all this talk of holes, combined with our reminiscences of books we both read in my parents' house, led me  to look up
The Hole Book by Peter Newell.  I grew up with my father's copy of it.  It was originally published in 1908, four years before Grandpa was born.  The complete book is here, appropriately on nonsenselit.org, which also spends a lot of time on Edward Lear,  found in your recent post.

To me as a child The Hole Book was fascinatingly weird. 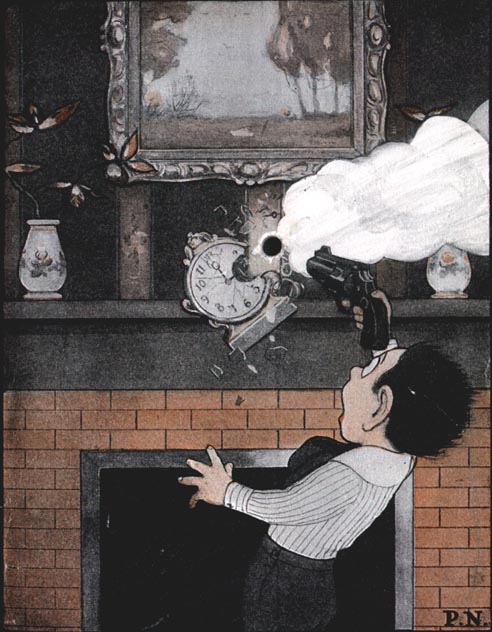 Tom Potts was fooling with a gun
(Such follies should not be),
When—bang! the pesky thing went off
Most unexpectedly !
Tom didn't know 'twas loaded, and
It scared him 'most to death—
He tumbled flat upont he floor
And fairly gasped for breath.
The bullet smashed a fine French clock
(The clock had just struck three),
Then made a hole clean through the wall,
As you can plainly see.
(Is this familiar to you?  How about my siblings?  Judy and Al -- remember this one?)
The hole in the page is a real one, and it continues through the book, following the bullet's trajectory.  It blows a hole in a boiler, explodes a car's gasoline tank, breaks the rope holding up a swing, smashes a fish tank, and just keeps on going and going.  It eventually meets its match:


Mis' Newlywed had made a cake,
With icings good and stout—
The bullet struck its armour belt,
And meekly flattened out.
100 years after Newell wrote it, some of the ethnic stereotypes are quite heavy-handed.  Not something to snuggle up and read with your four year-old, at least not without taking a good look at it first.  But it has a rollicking nuttiness to it.  Newell also wrote Topsys and Turvys (illustrations start on page 6), an optical illusion book.
Love,

Deborah
Posted by Deborah at 10:44 PM