A couple of months ago, in response to reader requests for books to help make their kids' school book fairs more diverse, I posted about a couple of organizations dedicated to increasing kidlit diversity.

I was so taken by the work being done by the folks at Multicultural Children's Book Day that I signed up to be an MCCBD blogger, and to link today's post to their website along with a host of other excellent bloggers. The co-creators of the event are Mia Wenjen from Pragmatic Mom and Valarie Budyar from Jump Into a Book. I've listed their sponsors at the end of this post. 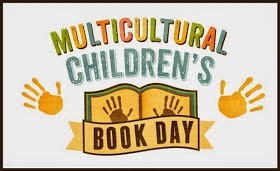 Despite census data that shows 37% of the US population consists of people of color, only 10% of children’s books published have diversity content. Using the Multicultural Children’s Book Day, Mia and Valarie are on a mission to change all of that. Their mission is to not only raise awareness for the kid’s books that celebrate diversity, but to get more of these types of books into classrooms and libraries. Another goal of this exciting event is create a compilation of books and favorite reads that will provide not only a new reading list for the winter, but also a way to expose brilliant books to families, teachers, and libraries.

The MCCBD team hopes to spread the word and raise awareness about the importance of diversity in children’s literature. Our young readers need to see themselves within the pages of a book and experience other cultures, languages, traditions and religions within the pages of a book. We encourage readers, parents, teachers, caregivers and librarians to follow along the fun book reviews, author visits, event details, a multicultural children’s book linky and via our hashtag (#ReadYourWorld) on Twitter and other social media.

After I signed up to be an official reviewer, the publisher Lee & Low Books sent me the recent YA novel Drift, by M.K. Hutchins. (Their website is another nice place to look for a variety of children's books celebrating diversity.)

Drift is an interesting read. It's set in a fantasy world based on the Mayan legend that described the world as perched on the back of a giant turtle, floating on a watery underworld. Hutchins takes this idea farther: in her universe, people live on multiple turtles, which swim around, feed on coral reefs, and sometimes go to war with and conquer each other. Each turtle/floating island home has a huge life-giving tree in its center. The roots of this tree are constantly being attacked by nagas: semi-human monsters with vicious teeth, who kill people in the water. You don't really want to go swimming.

Because a turtle is slowed down by having more people to carry, being married and having children is seen as a major negative. The top echelon of society are the Handlers (male) and the Tenders (female), who live in and protect the tree. They remain celibate, but come out to settle disputes among the artisans (also celibate) and the farming class (they're the ones who have kids, ew).

Our hero and narrator is a boy named Tenjat, who escaped with his sister from their previous turtle-island after something (Tenjat doesn't know what) forced them to leave. They left their father and younger brother on the island, and their mother sacrificed herself to the nagas so their raft could reach the new shore. Over the course of the novel, Tenjat passes the test to become a Handler, and begins to learn about the inner workings of the tree and the secrets in his past -- just as the turtle and tree are threatened! The story culminates with a satisfying explanation of how this world fits into the world we know -- thought-provoking stuff, especially for a 12-14 year old.

The world Hutchins creates is a fascinating one, and multicultural in that it's based in Mayan legend, and there are a few descriptions that imply everyone in the book has brown skin. I was struck, however, by the restrictive gender roles throughout. Boys and men have one set of roles, girls and women another, and all interactions between them are loaded with the threat that women might seduce men into becoming "hubs" (husbands), a terrible fate.

Hutchins sets up her two main female characters as exceptions to the rule: they're two of the most powerful people in the book. Eflet, Tenjat's sister, turns out to be a Seer; it is her powers that have put the family in danger. Avi, Tenjat's Handler trainer and love interest, is the only female Handler, and has both Handler and Tender gifts. Tenjat, it turns out, has Tender gifts as well as Handler ones, so there's a little gender-bending there.

But ultimately, Eflet, Avi, and Tenjat play into gender stereotype. There aren't any male-female friendships unaffected by romance. Eflet is oddly secretive, revealing almost nothing to Tenjat about their shared past. Even when all is revealed by the end of the book, her sphere remains domestic and child-bearing, and you get the feeling Tenjat still doesn't understand her mysterious femaleness. Avi is kicked out of the tree, and while she has saved Tenjat's life several times, they start a new life together in a place where he has experience and knowledge, but she has none.

The fact that I was prompted to think so much about this, to trouble it deeply, speaks to the staying power of the world of the novel, and the imagery in it. Still, it's a book I'd want to discuss with my daughters if they read it on their own. (Eleanor, age almost-8 but with a crazy high reading level, tried picking it up, but deemed it "too scary." Maybe later.)

For now, I'm thrilled to have another set of lists where I can look for titles for all three of my children, and for the classrooms and book fairs I'll be involved in in the future.